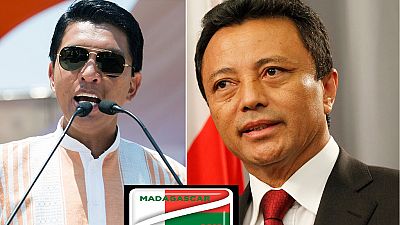 Madagascar’s top court announced results of the November 7 presidential election on Wednesday, confirming that ex-presidents Marc Ravalomanana and Andry Rajoelina would be contesting a second round of the poll.

According to the High Constitutional Court, Ravalomanana garnered 35.35 percent of the vote while Rajoelina got 39.23 percent.

The result also means incumbent President Hery Rajaonarimampianina who managed just 8.82 percent will not take part in the second round, due on Dec. 19.

I appeal to those who did not come to vote. You have an electoral card, come and vote. The country’s future for the next five years is at stake.

The country’s electoral law provides that the top two candidates advance to a second round, if no one obtains an absolute majority of fifty percent plus one vote.

READ MORE: Here’s everything you need to know about Madagascar’s presidential polls

We now present to you the profiles of the two candidates who have been flagged off to contest a second round of the presidential poll.

Both candidates, who have governed the Indian Island ocean before, are bitter rivals.

Ravalomanana was toppled by protests led by Rajoelina in 2009. The African Union and other international organisations described it as a coup.

Madagascar’s elected leader from 2002 until he was overthrown in 2009, Ravalomanana is known to voters as “the milkman” because he owns the country’s leading dairy conglomerate.

Following a power struggle and weeks of bloody street protests, the self-made millionaire businessmen was toppled in a military coup and replaced by Rajoelina.

He lived for years in exile in South Africa before returning to Madagascar in 2014 to mount his political comeback.

Ravalomanana, 68, says the country has gone backwards since he was ousted.

If elected, he told Reuters in an interview:

“We will rebuild everything they have destroyed, repair the roads that we built when I was president and that have not been maintained until now.”

A former disc jockey who goes locally by the nickname “TGV” after the fast French train, Rajoelina seized power from then President Marc Ravalomanana in 2009.

Known for his rapid-fire rhetoric and charisma, he became Africa’s youngest president at the age of 34.

During his four years in power, poverty and corruption grew as investors and donors cut aid.

He supported Rajaonarimampianina in the 2013 election after he agreed not run himself to help restore order.

This time, the former president is promising infrastructure development – everything from hospitals, schools and sports stadiums – and pledging to improve beaches to make them “like those of Miami and Côte d’Azur” to draw more tourists and promote job creation.

This is the first time Ravalomanana and Rajoelina are facing off at the ballot, and they both called for a higher voter turnout following Wednesday’s proclamation of results.

“I appeal to all citizens, to those who did not vote, it is not too late. The time to save Madagascar has come. Vote in the next election,’‘ Rajoelina told reporters.

“I appeal to those who did not come to vote. You have an electoral card, come and vote. The country’s future for the next five years is at stake,” said Hanitra Razafimanantsoa, vice-president of the National Assembly and a member of Ravalomanana’s TIM party.

The constitutional court reported a turnout of 53.95 percent among registered voters.

Judge Rakotoarisoa also cautioned the two hopefuls to “avoid provocations” as they headed into what is expected to be a close contest.

“The people of Madagascar do not need trouble,” he said.

Madagascar, a former French colony, is well known for its vanilla and precious redwood, and will be hoping for a peaceful election.