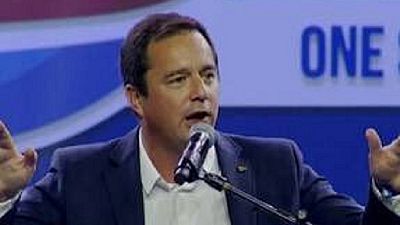 A top South African lawmaker has split public opinion on the country’s Twitter space after it emerged that he was in the lawmaking chamber with a matric qualification.

John Steenhuisen of the main opposition Democratic Alliance, DA, has since come under a barrage of criticism led by members of another opposition party the Economic Freedom Fighters, EFF.

In South Africa, matriculation (or matric) is a term commonly used to refer to the final year of high school and the qualification received on graduating from high school, although strictly speaking, it refers to the minimum university entrance requirements.

Steenhuisen, who is the DA’s chief whip in parliament has meanwhile received the backing of the party leader Mmusi Maimane who posted a statement of support on Twitter.

“I have worked with a great legislator, a chief whip and a friend. He is the finest Chief whip of the opposition in Parli. A constitutionalist and a fierce defender of freedom. He will continue to serve our party and the people of South Africa, John Steenhuisen,” Maimane posted on Sunday.

Incidentally, his headache started because of an initiative advanced by his party in his home region. A provincial DA wing floated the idea of allowing persons with degrees or higher qualifications to hold top positions within the party.

Leading members of the EFF have accused him of benefiting from white privilege in a country that’s still trying to reconcile racial tensions having come from the apartheid regime decades back.

The hashtag #Steenhuisen and #SteenhuisenGoToSchool have trended on Twitter since the discussions started over the weekend.

For all your degrees and qualifications you’re still a bunch of VBS looters and thugs I’m sure those who have suffered as a result of your party’s greed and thuggery have taken cold comfort knowing you had a degree while you betrayed them. https://t.co/l1GCkd0gVn

Your qualifications have obviously equipped you and your journeymen well for rational debate (beating up journalists) and VBS looting. I would rather be degreelesss and honest than qualified and dishonest like you. https://t.co/1fdDi8KuIC

What percentage of #ANC MPs have degrees? #Steenhuisen

Everyone defending #Steenhuisen must understand this. 1.) his skin color afforded him an opportunity to enter and acquire the experience. 2.) saying he has experience does not invalidate the point many are making. 3.) defending exposes you as hypocrites. Thank you.

The same people who called former President Jacob Zuma and former SABC boss, Hlaudi Motsoeneng incompetent for not having matric certificates or qualifications are the same people defending #Steenhuisen and calling him a “natural born intelligent”. Loool ae …? pic.twitter.com/K6MAygbbst

jsteenhuisen is undoubtedly one of the finest minds in our country and as far as parliament goes, he is one of the VERY finest politicians SA has produced. I have never been prouder to serve as a whip with him as our Chief and I thank him everyday for all he does for our country

I’ve known jsteenhuisen 10 years. He’s taught me everything I know in politics. Honesty, hard work, accountability, knowing your subject matter, dedication to my party & country. No degree can teach you that. SA & the DA is a better place because of people like John.