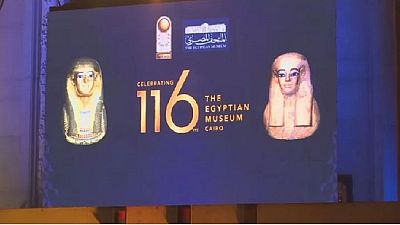 Bright lights illuminated the Egyptian Museum in Cairo’s Tahrir Square on Monday during a celebration that could mark the last time the two-storey museum is feted as one of Egypt’s main tourist attractions.

Located in one of Egypt’s most famous squares, the museum has been the country’s principal keeper of antiquities for over a century, but a bigger museum is under construction.

Officials celebrated the 116th anniversary of its founding and insisted it will not become obsolete once the Grand Egyptian Museum opens its doors. Antiquities will be moved to the new museum, which is expected to partially open next year.

“Our ceremony this evening is to tell the world this museum will never die,” said Antiquities Minister Khaled al-Anany.

The old museum will be used to display recent discoveries as well as antiquities from store rooms, the minister said.

Housing the world’s biggest collection of pharaonic antiquities has been a challenge for museum building, which was established in 1902.

Tens of thousands of objects have been sitting in its storerooms and galleries were often said to be too packed.

The Grand Egyptian Museum will be located near the Pyramids and Cairo hopes it will help a tourism industry that has suffered from the turmoil that followed a 2011 uprising.

Highlights of the evening were exhibitions of mummies and the ornamented coffin covers of pharaonic courtier Yuya and his noblewoman wife Thuya.

A 20-metre-long papyrus said to be the longest on display in Egypt was also on show during the ceremony.