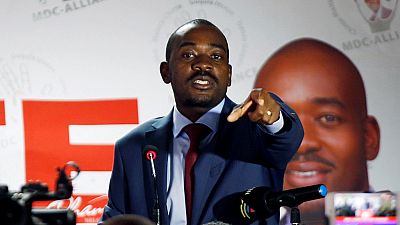 The July 30 poll was the first after Robert Mugabe was forced to resign following a coup in November 2017. In the aftermath of the vote, six civilians died in an army crackdown on opposition protests.

Chamisa lost a legal challenge to the election results but still maintains the vote was rigged and that Mnangagwa lacks legitimacy.

They must be able to invite Mr Mnangagwa. If he is not going to go, why should I go alone?

A commission of inquiry led by former South African president Kgalema Motlante has heard evidence from security chiefs who this week denied soldiers had killed civilians and blamed Chamisa and other opposition leaders for inciting violence.

Video from the Aug. 1 protests showed soldiers, some with their faces obscured by camouflage masks, opening fire with automatic weapons.

Chamisa said he and former finance minister Tendai Biti were among leaders of the opposition Movement for Democratic Change (MDC) who on Thursday received letters calling them to appear before the commission when it resumes hearings next week.

“If they are to be fair, what’s good for the goose must be good for the gander, they must be able to invite Mr Mnangagwa. If he is not going to go, why should I go alone?” Chamisa said to reporters at the MDC’s headquarters in Harare.

Police chief Godwin Matanga on Tuesday told the commission that Chamisa could be arrested any time for inciting violence. Chamisa said this was part of pressure on him to recognise Mnangagwa as president.