AFCON: Nigerians react to $25,000 offer for goals against South Africa 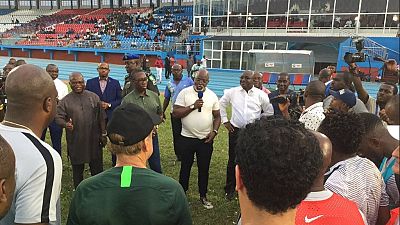 Nigerians on social media have expressed mixed reactions towards the offer of a $25,000 cash reward to the national football team for every goal scored in Saturday’s cup of nations qualifier against South Africa.

The offer was made by the governor of Nigeria’s oil-rich Delta state region, Ifeanyi Okowa, who visited the Super Eagles in a training session at the Stephen Keshi Stadium, Asaba on Wednesday.

Nigeria, will be playing to win the match in Johannesburg, in order to secure a place at the African Nations Cup (AFCON) in Cameroon next year.

While it is not unusual for politicians to offer cash rewards to national football teams in Nigeria and Africa, some argued on social media that the money could be better spent on service delivery.

GovIfeanyiOkowa , Why have you promised $25k for every goal scored? ? In comparison, the Super Falcons don't get such humongous stipends. This is outrageous! 9million naira that can instead be used to benefit the lives of thousands of Deltans. ?

Waste of State Resources.. The Student Populace of the Only State owned University Delta State university Oleh Campus haven't still be paid their Bursary of #19500 since last session.. and He is here dashing out Money..2019 will tell who held and played the card well..

$25k per goal? That is nine million nigeria naira and it would be enough to build a classroom block in one village in delta state. Stop enriching millionaires.

Hope the governor is paying from his personal money not using the state resources.