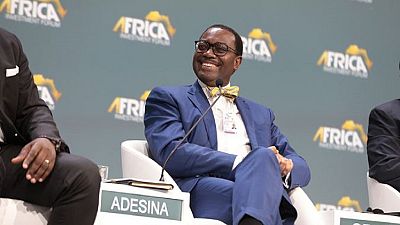 <p>Akinwumi Adesina, president of the African Development Bank, AfDB, has underscored that disciplined investment was the only sure way for countries to develop and not through aid.</p> <p>Adesina was speaking on the first day of the historic Africa Investment Forum, <span class="caps">AIF</span>, currently underway in South Africa’s Sandton Convention Center in Johannesburg.</p> <p>An AfDB statement described the forum as the first ever transaction-based Forum, “This is not an event. It is a platform where governments, private sector, investors, and project promotors come together. We develop quality bankable projects, de-risk them and actually make sure it happens,” Adesina said.</p> <p>“We are committed to fast track development. We know countries do not develop from aid but by the discipline of investment. We require broad-based partnerships and collective effort with the private sector and institutional investors,” he further noted.</p> <p>He generally tasked stakeholders from governments, international organizations and other partners to join hands to seize the opportunity to fast track Africa’s investment and development agenda.</p> <p>His comments comes at a time when leaders around the continent troop to China and other global capitals for aid and grants. The claim that China especially aims to recolonize African economies has serially been rejected by Beijing and most African governments.</p> <p>The opening plenary featured heads of leading Development Finance Institutions and Forum partners, including Patrick Dlamini, <span class="caps">CEO</span>, Development Bank of Southern Africa; Professor Benedict Oramah, President, the Africa Export-Import Bank; Dr. Bandar M. H. Hajjar, President, Islamic Development Bank; Admassu Tadesse, President, Trade and Development Bank; Alain Ebobisse, <span class="caps">CEO</span>, Africa 50; Mallam Samaila Zubairu, <span class="caps">CEO</span>, Africa Finance Corporation. </p> <p>Panelists on their part agreed that there was the need to leverage on a new way of working together as a continent stressing the need for African leaders to set the tone in creating conducive business environments in their countries.</p> <p>The Africa Investment Forum, which runs from November 1 – 9, 2018; is part of a much bigger drive by the African Development Bank to tap into the vast pool of global capital to fund its ambitious plan to transform Africa. </p> <p>The Bank estimates the continent needs between US$130 billion and US$170 billion a year to fund its critical development needs. </p> <p>Due to tightening budgets, traditional funding sources such as national governments and development institutions like the African Development Bank alone are unable to meet Africa’s capital needs. </p> <blockquote class="twitter-tweet" data-lang="en"><p lang="en" dir="ltr">AfDB President Akinwumi Adesina wins $250,000 World Food Prize <a href="https://t.co/8UfLkOYb9U">https://t.co/8UfLkOYb9U</a></p>— africanews (@africanews) <a href="https://twitter.com/africanews/status/879674641945698304?ref_src=twsrc%5Etfw">June 27, 2017</a></blockquote> <script async src="https://platform.twitter.com/widgets.js" charset="utf-8"></script>