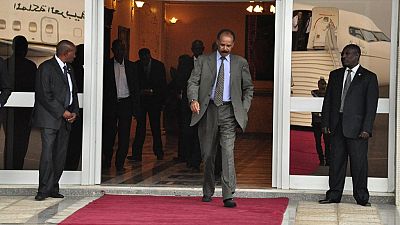 The Eritrean president, Isaias Afwerki, is due to back in Ethiopia this Friday with a scheduled visit to the Amhara region, Ethiopia state media outlet, FBC, have reported.

It was announced in August this year that Afwerki will visit the region but no details of the date was advanced. He is due to visit the regional capital Bahir Dar and the historic city of Gondar, the report added.

The trip will be Afwerki’s third to Ethiopia following the July 8 peace deal with Ethiopia. It was during Prime Minister Abiy Ahmed’s historic visit to Asmara that the two nations agreed an end to decades of “no peace – no war footing.”

Afwerki, days after Abiy’s visit returned the gesture by flying to Addis Ababa – his first in two decades.

During the visit, he officiated the reopening of Eritrea’s embassy in Addis Ababa, held talks with the then president and other government officials before attending a concert in the capital.

He recently returned to Addis Ababa to discuss ways of implementing the peace deal, he joined Abiy to commission a Sugar factory in southern Ethiopia after bilateral talks.

Abiy has also visited Eritrea once since the deal was signed. He stopped by on his return from Beijing where the Forum for China – Africa Cooperation, FOCAC, was held in September.

He also joined Afwerki and Somali president Mohammed Abdullahi Farmaajo to sign a trilateral peace agreement for the Horn of Africa neighbours.