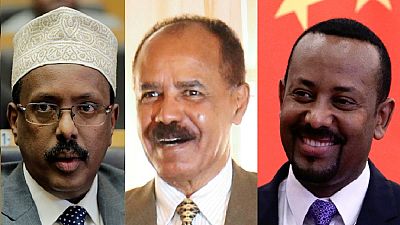 <p>Leaders of three Horn of Africa countries are set to hold a meeting in the Eritrean capital, Asmara, the country’s Information Minister Yemane Meskel said on Wednesday.</p> <p>Ethiopian Prime Minister Abiy Ahmed has already arrived in the country where he was met by Eritrean president Isaias Afwerki at the Assab airport.</p> <p>Somali president Mohamed Abdullahi Mohamed Farmaajo is expected to join the duo later today for a tripartite summit. No further details of the agenda of this meeting was given.</p> <p>Abiy’s return to Asmara is the first time since July 2018 when he arrived for an official visit leading to the signing of a peace deal that ended a protracted war between the two nations.</p> <p>Since then, Afwerki reciprocated the visit when he went to Addis Ababa for a three-day official visit. The pair met again in the United Arab Emirates where the Crown Prince conferred on them medals for their role in the peace process.</p> <p>Beside Assab, Abiy is expected to visit the other port city of Massawa and to also hold high-level discussions with Afwerki over the implementation of the July 9 agreement.</p> <blockquote class="twitter-tweet" data-lang="en"><p lang="en" dir="ltr">Prime Minister Abiy Ahmed and his delegation were accorded warm welcome by President Isaias Afwerki when they arrived at Assab Airport this morning on a stop-over, two-day, visit to Eritrea on their way back home from the <span class="caps">FOCAC</span> Summit in Beijing. <a href="https://t.co/l3Mu6dqOIX">pic.twitter.com/l3Mu6dqOIX</a></p>— Yemane G. Meskel (@hawelti) <a href="https://twitter.com/hawelti/status/1037272916155682816?ref_src=twsrc%5Etfw">September 5, 2018</a></blockquote> <script async src="https://platform.twitter.com/widgets.js" charset="utf-8"></script> <p>Asmara has assumed a diplomatic hub of sorts in the region as Afwerki has in under two months hosted Ethiopian, Somali and South Sudanese leaders.</p> <p>The last time an issue over the political implementation of the peace deal came us was last month when the Eritrean government sent a delegation led by Foreign Affairs minister Osman Saleh to Addis Ababa. The delegation went through Mogadishu before returning to Asmara.</p>