Security tight ahead of funerals for Egyptian Christians killed by gunmen 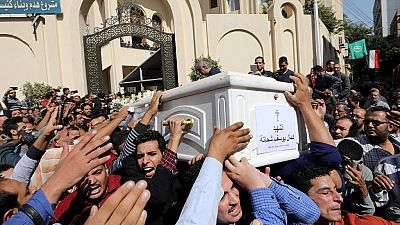 Armed security has been deployed outside a church South of Cairo on Saturday where funerals for victims of a militant attack are expected to be held.

Coptic Christian in the Egypt City of Minya prepared to bury their dead, a day after militants ambushed three buses carrying Christian pilgrims on their way to a remote desert.

Seven people where killed on Friday afternoon when gunmen opened fire on the two buses returning from a child’s baptism at a Coptic monastery in Minya, Egypt.

Another 18 people, including children, were wounded in the most serious attack on the minority in more than a year.

Islamic State claimed responsibility for the ambush in Minya province in central Egypt, the militant group’s Amaq news agency said, without providing evidence of its involvement.

During the funeral service, a priest and members of the congregation prayed and chanted over a row of white coffins.

According to a list of the victims’ names released by the church, all but one of those killed were members of the same family.

The list reveals that a boy and a girl, ages 15 and 12 respectively, were among the dead.