Ethiopia launches visa on arrival with a week to implementation 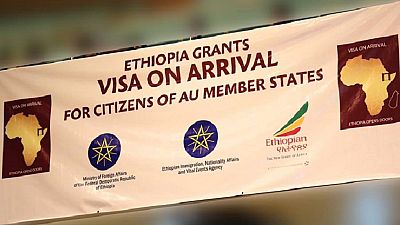 A week to the implementation of a visa-on-arrival regime for all Africans, Ethiopia has officially launched the policy which kicks off on November 9.

The event which took place at the headquarters of the African Union in Addis Ababa was attended by government officials and the AU chief Moussa Faki Mahamat.

The state minister of foreign affairs, Hirut Zemene emphasized the importance of allowing Africans to enter Ethiopia easily stressing that it was not just a prime plank of Prime Minister Abiy Ahmed’s plans but a fulfillment of the vision of pioneer African leaders.

This measure demonstrates Ethiopia’s commitment for the fulfillment of AU’s Agenda 2063.

“The issuance of visa on arrival for all Africans will clearly demonstrate our resolute to the ideals and objectives of the AU and determinations to continue to play rightful roles towards free movement of people and the realization of our integration agenda,” she added.

For his part, the AU chief was quoted as saying: “This measure demonstrates Ethiopia’s commitment for the fulfillment of AU’s Agenda 2063.”

Also in attendance were high level government officials, CEO of Ethiopian Airlines, members of the diplomatic coprs and other interested parties.