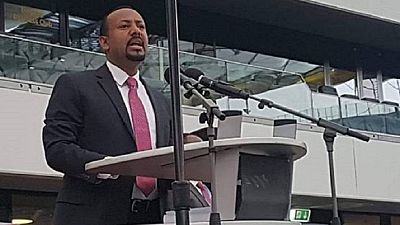 Prime minister Abiy Ahmed called on Ethiopians in Europe to play their role in building the country, by contributing financially or otherwise in all sectors.

Abiy, who was welcomed by thousands of Ethiopians from all over Europe gathered at the Commerzbank Arena in Frankfurt, Germany, was winding up a European tour that included a meeting with France’s Emmanuel Macron.

Below are highlights of the issues Abiy addressed in his Frankfurt speech;

Let’s unite and build the future Ethiopia. It is the responsibility of all to strive and do more to build a democratic Ethiopia.

Abiy, who has championed several reforms across the social, economic, political and diplomatic spectrum, called on Ethiopians in the diaspora to ‘unite and build’ the country.

“Let’s unite and build the future Ethiopia. It is the responsibility of all to strive and do more to build a democratic Ethiopia,” the premier said.

He added that the government is committed to reforming the electoral body, so that it can deliver credible elections in 2020.

The prime minister who sought to attract investment from France and Germany during his European trip, also called upon Ethiopians to ‘draw lesson from Europe how to defeat poverty’.

He pledged to tackle the economic issues of unemployment and inflation affecting Ethiopia.

Abiy also vowed to deal with the prevailing inter-ethnic conflicts, even as he pursues positive diplomatic relations with allies.

Abiy has consistently called on Ethiopians in the diaspora to engage in ongoing efforts to reform the country.

Members of the diaspora played a key role in fuelling anti-government protests that eventually birthed the ongoing political reforms in the country.

Abiy met Ethiopians in the United States and has set up a diaspora fund to facilitate their engagement.

In Frankfurt, Abiy tasked Ethiopians, whom he described as ambassadors of their country to contribute by ‘raising a dollar’