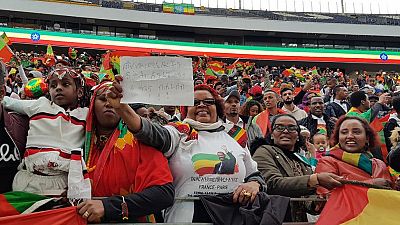 Frankfurt’s Commerzbank Arena in Germany has been draped in Ethiopian colours as hundreds of nationals troop in for the much awaited meeting with Prime minister Abiy Ahmed.

Photos and videos shared by the Voice of America, VOA, Amharic service, showed Ethiopians draped in the bright red, yellow and green colours.

Most of them are hoisting the national flag whiles there is also a strong presence of the Oromo Liberation Front, OLF’s flag. The women especially are also seen fully displaying different Ethiopian culture in their appearance.

Abiy’s final stop on his first European tour is in Frankfurt where he is set to address the country’s diaspora on the need to positively support and contribute to ongoing reforms back home.

His trip started in Paris, where he met French president Emmanuel Macron for talks. He flew to Berlin where he met Chancellor Angela Merkel and also participated in the G20 Compact with Africa, CwA, summit held on Tuesday.