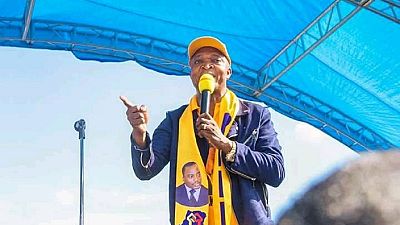 The EU imposed sanctions last year on Shadary, who served as interior minister, and 15 other Congolese after a crackdown on protesters who opposed a delay in holding elections. The delay has let President Joseph Kabila stay in office two years past his legal mandate, although an election is now set for Dec. 23.

Congo’s government has said the sanctions, which include travel bans and asset freezes, are illegal, and renewing them is pointless because Kabila plans to step down after the election.

Renewal requires a unanimous vote from the EU’s 28 member states, with a decision expected just 11 days before the election in Congo. Two diplomats said the EU had agreed on renewal despite initial opposition from Spain, which proposed to take Shadary off the list.

A Spanish-led consortium two weeks ago signed a joint deal with Congo to develop a $14 billion hydroelectric project. Two diplomats said the project influenced Spain’s position. A Spanish spokesperson was not immediately available to comment.

As interior minister, Shadary oversaw the police during the crackdown, in which demonstrators protesting against Kabila’s extended rule were killed. He is now running for president and has been hand-picked by Kabila.

He faces some popular opposition candidates hoping to take advantage of Kabila’s decision to step aside after 18 years in power.

Felix Tshisekedi, who leads Congo’s largest opposition party, would receive 36 percent of the vote ahead of 16 percent for Shadary, according to a poll released on Tuesday by the Congo Research Group at New York University and Congolese polling firm BERCI.

However, the poll showed that 64 percent of people do not trust the electoral commission to conduct a free and fair election.