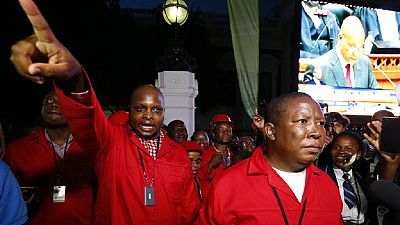 The presser at its headquaters was addressed by leader Julius Malema and Shivambu. Malema categorically rejected contents of a report that alleged that his deputy had benefitted from the collapse of black-owned VBS Mutual bank.

Whiles refusing to comment on the validity of the report describing a pronouncement as premature, Malema said Shivambu had the EFF leadership had full confidence in the deputy leader.

A recovery plan that can save the bank or support of other black owned prospective black licence applicants to serve the people in rural areas...must be devised.

Malema told journalists that Shivambu brought his financial statements to EFF leadership and that upon perusal they could not locate any money from VBS or Sgameka etc.

Sgameka is a company run by Brian Shivambu, brother of Floyd and an official of the EFF. Malema said there are financial exchanges from Floyd to Brian and Brian to him – also his brother Lucky and parents.

An investigation commissioned by by the country’s reserve bank into the operations of VBS bank, which was in March, placed under ‘curatorship for the safety of depositors’, revealed that Brian Shivambu, an EFF member received over $1m (R 16m) from the bank.

The EFF in an earlier statement called for the criminal prosecution of implicated individuals and organisations in the ‘VBS defrauding’.

The statement reiterated the party’s position that the bank should not be shut down, since it is critical for financial inclusion of black communities in the country.

“A recovery plan that can save the bank or support of other black owned prospective black licence applicants to serve the people in rural areas…must be devised,” the statement read in part.

About the VBS probe

Advocate Terry Motau, who led the VBS probe, recommended that criminal charges be brought against the more than 50 individuals and entities who orchestrated and benefited from the heist that saw at least 1.9 billion rand ($130 million) stolen from the bank.

Motau’s probe found that VBS actively sought to attract deposits from municipalities and other state entities and that bribes were paid to solicit the money.

Bribes were also paid to people who became aware that money was being stolen for them to keep silent, it also found.

VBS was also in the spotlight when it gave Zuma a 7.8 million rand loan to reimburse the state for upgrades to his personal home.