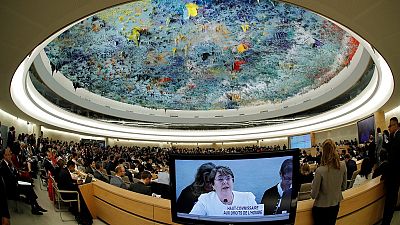 The United Nations Human Rights Council on Friday elected a new set of representatives to serve three-year terms. In all, 18 countries were elected across the world.

The move has however attracted the ire of political and human rights groups who insist that Eritrea, Cameroon and Somalia had no business serving on the Council given their current rights record.

Burkina Faso, Cameroon, Eritrea, Togo and Somalia have just been elected on clean slates for the Africa Group to seats on the UN Human Rights Council. #sabcnews

Eritrea is a known jailer of dissidents – political, media, religious. The United Nations rapporteur has repeatedly reported of arbitrary arrests and detention. Asmara has most times remained mute or dismissed such reports.

Cameroon is in the middle of two security crisis – the Boko Haram war in the Far North and separatist face off in the Anglophone regions. The army has serially been reported of using highhandedness in both operations.

Soldiers have been filmed burning down villages in the Anglophone regions whiles videos have exposed arbitrary killing of unarmed civilians in the Far North region.

Over in Somalia, the fight against insurgent group Al-Shabaab has often resulted in government’s arbitrary use of powers to arrest suspects and journalists. State security forces have also been accused of killing people believed to be affiliated with the insurgents with little or no basis.

Toho also has its human rights record tainted in the anti-government protests of 2017 when security forces fired at protesters and were also caught on camera beating protesters.

Togo was also the only African country that voted with the United States at the U.N. in recognizing Jerusalem as capital of Israel.

The Human Rights Council is responsible for promoting & protecting the
human rights of all people all over the ?. Learn more about Friday's UN_HRC elections: https://t.co/BW8RxUX8oX #StandUp4HumanRights pic.twitter.com/2874ZCiB5R