Akon's Akoin wins him 'Innovator Of The Year' award 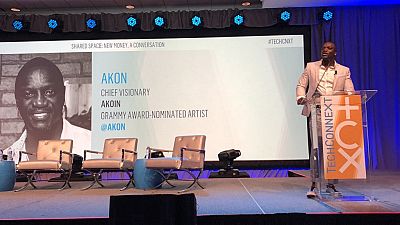 <p>America-born Senegalese artiste, Akon, real name Aliaume Damala Badara Akon Thiam, has scooped an award as ‘Innovator Of The Year,’ by the Black Enterprise group during its TechConNext event held recently.</p> <p>The songwriter, singer and producer was awarded in relation to Akoin, a crypto currency project he is undertaking in Africa. His Akon Africa lighting project is more known especially in West Africa.</p> <p>“Akoin is for Africa but we are starting in Senegal,” he stressed in his remarks at the event where he was tagged Akoin Chief Visionary. </p> <p>The event brought together some heavyweights in the tech industry, like Intel group’s Corporate Strategic Procurement Director, Cory Hooks and Ebay’s Diversity Officer, Damien Hooper-Campbell.</p> <p>Other award winners included Christopher Gray whose educational app, My Scholly, earned him Breakout Star of the Year. <span class="caps">CEO</span>, founder of Blavity Inc was named Founder of the Year and Lloyd Carney of Carney Global Ventures, <span class="caps">LLC</span>, as Trailblazer of the Year.</p> <h2 style="font-size:16px;">Akon speaks on Akoin and Lighting Africa </h2> <blockquote class="twitter-tweet" data-lang="en"><p lang="en" dir="ltr">Learn more about <a href="https://twitter.com/Akon?ref_src=twsrc%5Etfw"><code>akon</a>’s effort known as “Akon Lighting Africa” and his cryptocurrency! <a href="https://twitter.com/hashtag/techcnxt?src=hash&ref_src=twsrc%5Etfw">#techcnxt</a> <a href="https://t.co/UZ6QaHOX1V">https://t.co/UZ6QaHOX1V</a></p>— Black Enterprise (</code>blackenterprise) <a href="https://twitter.com/blackenterprise/status/1049424781622140928?ref_src=twsrc%5Etfw">October 8, 2018</a></blockquote> <script async src="https://platform.twitter.com/widgets.js" charset="utf-8"></script> <p>Akon together with fellow Senegalese Niang and Malian entrepreneur, Bathily; co-founded Akon Lighting Africa initiative. A project aimed at ‘‘bringing clean energy to millions of households in Africa.’‘</p> <p>The initiative in 2016 announced that it had raised about 1 billion dollars to finance projects in Africa. Akon told the media that even though it was not an easy task for him raising the first billion dollars. </p> <p>He added that Africa was in dire need of basic neccesities like potable water and electricity. He said his desire for luxury reduced when he noticed the poor development in Africa.</p> <p>In 2015, the award-winning artist launched the first mega-solar project aimed at providing electricity to some 600 million Africans. </p> <p>The initiative primarily targets rural communities that are not connected to the electricity and also seeks to find ways to bring costs down to make power supply more affordable.</p>