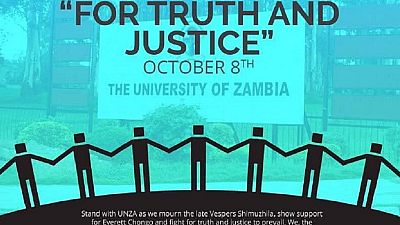 Hundreds of students of the University of Zambia (UNZA) marched on Monday, protesting the death of their colleague during last week’s protests over delayed meal and accommodation allowances.

Vespers Shimuzhila, a fourth year student at UNZA died of suffocation when police fired a teargas cannister into her room, while another student Everett Chongo, sustained severe injuries when she jumped off the the third floor of her hostel on Thursday night.

Evelyn is to be evacuated to South Africa for specialised treatment, according to the health minister Chitalu Chilufya.

We need to dialogue on how to fund higher education going forward. Tax payers supporting drunkenness and violence at UNZA can't continue.

All we want is #JusticeForVespers and government accepting responsibility.

This death was unnecessary and painful to the nation. All we need is #JusticeForVespers. Thinking of Nsaatuu and others who almost died next to that burning room and are still traumatized. We stand with you

The country’s minister of information and government spokesperson, Dora Siliya, also took to Twitter to say that students who had organised Thursday’s riots, despite the fact that bursaries were expected on Saturday should be held responsible for Vesper’s death.

President Edagr Lungu, said government will await the outcome of a police investigation into the cause of the riots before taking action.

Government officials believe that the riots were fuelled by the opposition whose ‘inflammatory’ press conference they say was attended by some students before the riots.