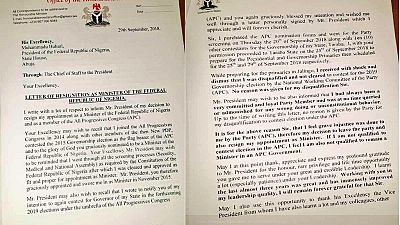 Nigeria’s women’s affairs minister, Aisha Alhassan resigned from president Muhammadu Buhari’s cabinet on Saturday, citing the ruling party’s decision to disqualify her from contesting for the Taraba governorship as one of the reasons for her action.

Alhassan, who becomes the second cabinet member to step down this month, added that she would also be leaving the ruling All People’s Congress party (APC).

Two weeks ago, Kemi Adeosun, who had overseen finance, stepped down over allegations she had used a forged certificate to avoid mandatory national service.

The resignations are the first in Buhari’s cabinet since he came to power in 2015, and come in the run-up to early 2019 elections, typically a time where fluid political allegiances in Nigeria change.

Why Alhassan is resigning

In Alhassan’s letter to Buhari, seen by Reuters, the minister said she was resigning and leaving the leader’s ruling All Progressives Congress (APC) party because she had been barred from running for governor of eastern Taraba state.

“I received with shock and dismay that I was disqualified and not cleared to contest for 2019 governorship election by the National Working Committee of the party (APC),” her letter said.

Today, the 29th of September 2018, I wish to transmit to the President my decision to resign as the Minister of the Federal Republic of Nigeria and withdraw my membership of the All Progressive Congress (APC). pic.twitter.com/glR1T4wGu5

“It is for the above reason, that I feel injsutice was done to be my the party, therefore my decision to leave the party and resign my appointment as minister.”

A spokesman for Buhari said he could not confirm the letter.

Last year, Alhassan told Reuters that Buhari had said he would only seek one term. He is currently campaigning for re-election.

Alhassan said at the time she would resign if Buhari sought a second term and that she would support former vice president Atiku Abubakar if he decided to run.

Atiku later quit the APC and is now running as a presidential candidate for the opposition People’s Democratic Party. 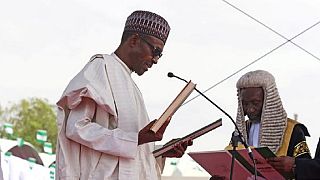 Buhari said in 2014 that he wanted to be a one-term president: minister 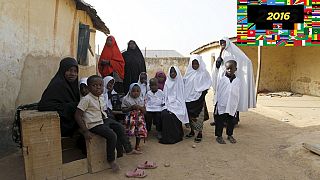 Nigeria gives married drop out girls another chance of education 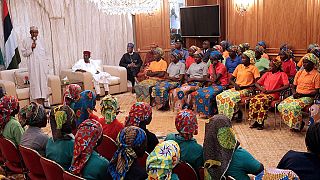 Buhari said in 2014 that he wanted to be a one-term president: minister

Nigeria gives married drop out girls another chance of education