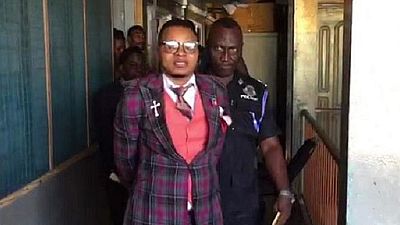 A maverick Ghanaian pastor who flogged two young lovers in church two years ago has been fined 12,000 cedis ($2400) for the action that drew huge condemnation across the country.

An Accra Circuit Court on Tuesday handed down the ruling against bishop Daniel Obinim of the International God’s Way Church and two other junior pastors for their roles in the assault.

A viral video in 2016 showed Obinim and his pastors publicly flogging a young man and woman he described as his children. The two, had been involved in a sexual relation that had eventually led to pregnancy.

Obinim was subsequently arrested by police in the industrial region of Tema after he handed himself in following an invitation from the police over the widely publicized flogging.

“We have just commenced investigation into this issue, when we finish we will hand him over to Domestic Violence Victims Support Unit (DOVVSU) to investigate the domestic violence issue,” police disclosed to local media outlet, Joy FM, at the time.

Background to the story

Bishop Obinim was seen on video publicly flogging two young members of his church for indulging in fornication. The pastor used a belt to repeatedly flog the two who are said to be living with him.

The sexual escapades of the two is said to have resulted in a pregnancy – the lady has since delivered and the couple were months back filmed visiting Obinim with the new born. The young lady is said to be an apprentice beauty therapist, whiles the young boy is unemployed.

The flogging was filmed and broadcast on the church’s TV channel and later went viral on social media.

Outrage and call for Obinim’s arrest

In the wake of the footage of the flogging, a huge social condemnation followed with calls for the arrest of the maverick preacher who has in the past courted controversy by his actions.

The Minister of Gender, Children and Social Protection at the time, Nana Oye Lithur, reported Obinim to the Accra Regional Domestic Violence and Victims Support Unit (DOVSSU), while another person also lodged a complaint against the bishop at the Tema Regional Police.

A private legal practitioner also filed a suit against the pastor for his actions. Lawyer Sosu was seeking an order from the Human Rights Division of the Accra High Court that would protect what he described as the fundamental human rights of members of Bishop Obinim’s church.