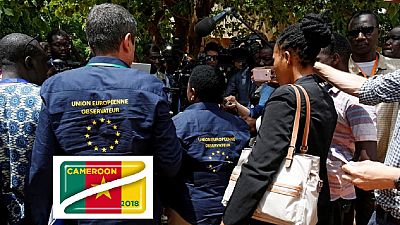 The European Union, EU, has officially confirmed that it will not deploy observers for Cameroon’s October 7 presidential polls.

The EU office in Cameroon responded via Twitter to reports that it was not going to participate in the process. They however tasked authorities to ensure a transparent and credible process.

“Referring to recent media reports, the EU will indeed not deploy an observation mission for the 2018 presidential elections. To be noted also that the EU has so far never observed elections in Cameroon,” their tweet read in part.

Cameroon’s presidential election is the last vote in a busy election year. Incumbent Paul Biya is seeking a new seven-year term after over three decades in charge. A security crisis in the English-speaking regions continue to threaten the conduct of polls in the northwest and southwest regions.

The EU has deployed observers for almost all elections in Africa in the last few years. The EU team made a return to observing polls in Zimbabwe during the country’s first post-Mugabe election. The former leader had barred them over claims of meddling.

His successor Emmerson Mnangagwa, however, invited them as part of his re-engagement with development partners.

The last time the EU was barred from observing an election was in December 2016 during presidential polls in The Gambia when ousted leader Yahya Jammeh said they were not welcomed.