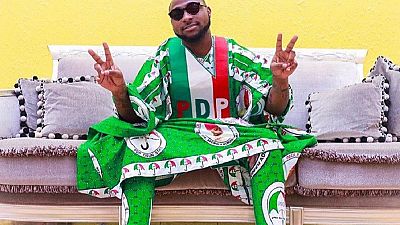 Nigeria’s Afropop sensation, Davido is causing political shockwaves in home sate of Osun where he is campaigning for the candidate of the opposition People’s Development Party (PDP) in the race to be governor.

The multi-millionaire singer-songwriter and record producer, has been posting pictures and videos on his social media, endorsing his uncle, Ademola Adeleke who is running on the PDP ticket.

Billboards in the state also show pictures of the singer in traditional dress, leaning on an empty black leather chair next to the Nigerian flag.

Osogbo Mega rally today !! IsiakaAdeleke1 victory awaits You and the Beautiful People of the state of Osun ! ????⭐️?❤️ pic.twitter.com/hKxmSeAaJW

Adeleke, dubbed “the dancing senator” because of his penchant for dancing in public, must be hoping his high-profile nephew can win him as many voters as he has music fans.

The 58-year-old politician is running for the main opposition Peoples Democratic Party (PDP) against Gboyega Oyetola of the ruling All Progressives Congress (APC).

Candidates from no fewer than 48 parties are vying to replace APC Governor Rauf Aregbesola, who is stepping down after a maximum of two four-year terms.

Saturday’s poll is the final major electoral test before Nigerians vote for a new president, parliament, governors and state legislatures in February and March next year.

Davido, real name David Adedeji Adeleke, recently signed up for the yearlong compulsory national service, and entertained his colleagues at the swearing-in event.

While Davido may be better known as one of Nigeria’s most successful musical exports, Davido also comes from a well-known political dynasty.

His grandfather, Raji Ayoola Adeleke,was a senator between 1979 and 1983 while another uncle, Isiaka Adeleke, was Osun’s first civilian governor from January 1992 to November 1993.

The performer’s father, Adedeji Adeleke, is a wealthy businessman with interests in banking, property, education, shipping, haulage and oil and gas.

Some people see a political future for Davido.

Davido is destined to become the youngest Governor of Osun State at some point. NYSC getting locked in. Already on the campaign trail, familiarizing himself with the people & the process. Family building a political legacy in the state.

It’s only a matter of time.

I love the fact that iam_Davido is going all out to support his uncle. 4 those saying he should better leave politics and face his music.. I'm pretty sure if it was your Dad or Uncle contesting for a political post, you would also do the same. #eyinhypocriteradarada #family pic.twitter.com/hwVMEvGQ2N

Davido still going strong for his Uncle Senator Adeleke’s Governorship rally in Osun.
Do you think he will consider politics in the nearest future? pic.twitter.com/G4JUwE76Ej