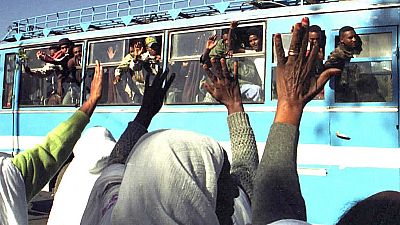 Trade, transport and peace are some of the early benefits that Eritreans and Ethiopians are enjoying, following Tuesday’s re-opening of border points between the two countries.

Kjetil Tronvoll, a Norwegian professor who follows developments in the Horn of Africa region tweeted on Friday that Eritrean were flocking markets in Adigrat and Mekelle to buy commodities like cement.

He added that buses could now cross without any border control.

‘‘Local trade is re-flourishing as Eritreans and Ethiopians trade with no currency exchange issues.Birr-Nakfa exchanged on parity on the ground. Very positive dev – but need institutionalisation!’‘ read part of Tronvoll’s tweets.

With the opening of the #Zalambesa border crossing btw #Eritrea – #Ethiopia u can now take the bus between Eritrea and Ethiopia without any border control! People r crossing both ways unhindered. Adigrat-Asmara costs 200 birr. People-to-people #Reconciliation

#Eritrea|ns are flocking to Adigrat and Mekelle in #Ethiopia to buy commodities, cement and other goods. Local trade re-flourishing. No trade or curreny exchange regime announced. Birr-Nakfa exchanged on parity on the ground. Very positive dev – but need institutionalisation!

The war that broke out in 1998 over the border and other issues killed an estimated 80,000 people before fighting ended in 2000 in a contested peace deal.

Tensions burned on over the position of the frontier until Ethiopia’s prime minister, Abiy Ahmed, offered to end the military standoff this year as part of a package of reforms that have reshaped the political landscape in the Horn of Africa and beyond.

Thousands of people from both countries, including soldiers waved Eritrean and Ethiopian flags, as they followed the border opening ceremony on Tuesday in Zalambessa.

Zalambessa, a town located on the Ethiopian border is part of the Misraqawi Zone of the Tigray region. It is about 42 kilometers north of Adigrat.

Adigrat is the last important Ethiopian city south of the border with Eritrea, and is considered to be a strategically important gateway to Eritrea and the Red Sea.

OLF rebels to return via Zalambessa

Meanwhile, state affiliated Fana Broadcasting reported on Friday that Oromo Liberation Front (OLF) soldiers will return to Ethiopia from their base in Eritrea on Saturday.

According to Woldegebrieal Asgedom of the Tigray regional state communication affairs bureau, at least 1300 soldiers will cross the Ethiopian border from Eritrea via Zalambessa.

He added that they will be given a warm welcome by residents of Adigrat and Mekelle.

OLF, which was until recently considered a terrorist organisation by the Ethiopian government, was swayed by ongoing political reforms to return to the country to pursue peaceful struggle.

The group this week announced it will merge with the Oromo Federalist Congress party ‘ to represent Oromia and the Oromia people’s interests’.