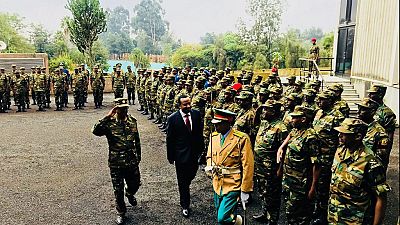 The Ethiopian Prime Minister Abiy Ahmed on Monday said Ethiopian troops and their Eritrean counterparts were set to celebrate the Ethiopian New Year along their common border.

Abiy in his New Year speech hours to the the day (September 11) told a gathering in Addis Ababa that the armies of both countries will mark the day with a resolve to be more peaceful and united.

His declaration also came hours after reports indicated that commanders of armies located in the Sabeta – Zalambeesa area had began dismantling borders to allow movement of persons into each others territories.

PM Abiy Ahmed in his New Year’s speech said #Ethiopia-n Defence Force & #Eritrea-n Defence Force will celebrate The New Year together at the border. A very Happy New Year to all Ethiopians & Eritreans. May our collective purpose for the New Year be a more peaceful & united! pic.twitter.com/q4Y8JHEMpd

The event which took place at the Millenium Hall also had in attendance top opposition figures who returned to the country in the wake of democratic reforms. The Patriotic Ginbot 7 leadership and the Ogaden National Liberation Front were in full attendance.

Ethiopia and Eritrea reestablished ties after decades old standoff over a border demarcation ruling that Ethiopia refused to implement.

On assumption of office, Abiy accepted the ruling and has since signed a peace deal with Eritrean leader Isaias Afwerki. Relations have since July 9 being cordial at all levels – diplomatic, trade, travel etc.

Abiy had declared in June that the New Year was going to be celebrated in Eritrea. He told artists to get ready to celebrate the Ethiopian New Year in Eritrea’s Asmara.

The Ethiopian calendar, sets September 11 as the 1st day of the New Year, and large celebrations are usually held around the country to mark this day, which also signifies the approximate end of the rainy season.