Bobi Wine in the US for medical treatment 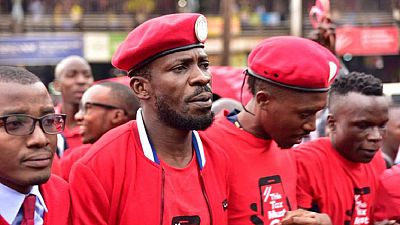 Prominent Ugandan opposition lawmaker Robert Kyagulanyi arrived in the United States on Saturday to seek medical treatment for what he said was torture by authorities in his country.

Kyagulanyi, a popular musician known by his stage name Bobi Wine, was elected last year and has amassed a large following among youth electrified by his scathing criticism of President Yoweri Museveni, sometimes delivered in his songs.

Protests had erupted in the Ugandan capital on Friday after police detained Kyagulanyi at the airport during a previous attempt to travel abroad for medical care.

I will soon tell you what exactly happened to me since 13th August and what is next.

Safely arrived in the US where I’ll be receiving specialised treatment following the brutal torture at the hands of SFC soldiers. We thank the world for standing with us. I will soon tell you what exactly happened to me since 13th August and what is next. #peoplepower Power pic.twitter.com/0IcA3wUAQd

Pop star-turned-MP Bobi Wine arrives in the US after arrest https://t.co/AAZnuZiPel

Bobi Wine arrives in the US, promises account of events in detention https://t.co/Dg0PsixjAE

In a tweet posted on Saturday evening, Kyagulanyi said: “Safely arrived in the US where I’ll be receiving specialised treatment following the brutal torture at the hands of SFC soldiers.” That referred to Uganda’s Special Forces Command.

“I will soon tell you what exactly happened to me since 13th August and what is next,” he said, referring to the day he was detained after being accused by authorities of throwing stones at a presidential convoy. He has pleaded not guilty to the charges.

Ugandan pop star-turned-MP Bobi Wine arrives in the US after his arrest in his home country – CNN https://t.co/yVG6iiS0E7

Kyagulanyi posted in his tweet a picture of himself sitting in a wheelchair and holding crutches, posing in an airport next to his wife.

The lawmaker has said he was beaten up and tortured while in detention.

Ugandan authorities initially dismissed the allegations that Kyagulanyi was beaten up in detention as “rubbish” and “fake news.” But late on Friday a police spokesman said there would be an investigation into those allegations.

Kyagulanyi, who has emerged as a formidable threat to the president who has been in power for 32 years, was charged with treason over his alleged role in the stoning of Museveni’s convoy.

Museveni has won praise in the West for his opposition to militant Islam in the region, but many Ugandans regard the 73-year-old as out of touch with his people, nearly 80 percent of whom are under the age of 30.

He has been in power since 1986 and has repeatedly been accused by his opponents of rights abuses and the widespread use of security forces to suppress opposition to his rule. He denies charges that his government is involved in rights violations.

#TheGuardianOnSundayNews UGANDA pop star and MP Bobi Wine has been released from hospital and is flying out of the country for medical treatment in the US, police say. / https://t.co/WgjUgI9ZY8 pic.twitter.com/Vb5wLA6rWw