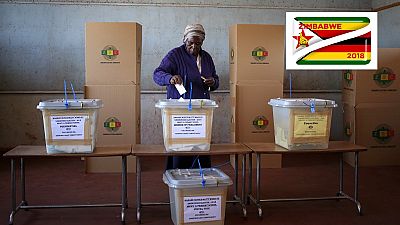 Africanews looks back at the July 30 election in Zimbabwe. The harmonized elections as they were referred to, were the first to be held in the post-Mugabe era. President Mnangagwa announced the 2018 election date in March this year.

Mugabe, the revolutionary leader turned Prime Minister and President, had led the country for over three decades but was deposed in a November 2017 military takeover – he insists was a coup.

In a country where campaigning ceases 24-hours to the polls, Mugabe, however, managed to stage a campaign of sorts for the main opposition, Movement for Democratic Change (MDC Alliance) with hours to the vote.

Mugabe called a press conference on July 29 to address issues he had with the government. In a question and answer session, the former leader said since he had been sacked from the ruling Zanu-PF, he was going to vote for the leading opposition candidate, Nelson Chamisa.

In response to Mugabe, the president in a message posted on Twitter said the former president had declared himself a de-facto opposition leader and that he wanted a route back to power using the main opposition.

“The choice is clear, you either vote for Mugabe under the guise of Chamisa or you vote for a New Zimbabwe under my leadership and Zanu-PF,” Mnangagwa said.

Aside the election of a president, voters were also to vote for lawmakers and for councillors. At the end of proceedings: Emmerson Mnangagwa secured a five-year term in a pool of over twenty candidates whiles Zanu-PF got a two-thirds majority in the legislature.

The vote largely went peacefully with observer groups giving citizens high marks for the manner in which they conducted themselves. The caution, however, was that the most crucial stage was yet to be dealt with – counting, collation and results declaration.

The ruling Zanu-PF took an early lead with the parliamentary count sweeping seats predominantly in rural areas where the country is said to have maintained a solid supporter base since post-independence.

Tension was however building in the case of presidential results. ZEC, the Zimbabwe Electoral Commission’s failure to release results coupled with opposition claims of tampering built up tension in opposition strongholds.

A subsequent protest in the capital, Harare, threatened to get out of hand amid burning of tyres and the destruction of property. The police eventually called on the army to help bring the situation under control.

The army were returning to the streets after the events of November 2017 that saw them roll tanks into the capital and to seize strategic national facilities like the parliament, the national broadcaster etc.

That army intervention widely condemned by observers and the international community as highhanded led to the death of six people whiles over twenty opposition members were also arrested – they are all currently before the courts.

Biti, had attempted to seek asylum in neighbouring Zambia after he was declared wanted. Authorities refused to grant his asylum and handed him over to Zimbabwe police despite a court order against the repatriation.

When ZEC eventually came to deliver results of the presidential elections, it declared Mnangagwa winner with 50.8% as against Nelson Chamisa’s 44%. The opposition declared the results as fake and vowed to challenge the results before the courts.

The court route was welcomed by the president, Zanu-PF and the international community. The crust of the case was that the Constitutional Court had to annul the results as declared by ZEC and to declare Chamisa winner of the polls.

The Constitutional Court in delivering judgment threw out the petition stating that the petitioners had failed to back their petition with enough proof to warrant a decision in their favour.

The court avers that “the applicant failed to place before it clear, direct, sufficient and credible evidence that the allegations happened. In other words, there was no proof of irregularities alleged.”

“It is not for the court to decide elections, it is the duty of the people … The application ought to be dismissed,” the chief justice Luke Malaba said.

After the initial results declaration, and in the face of an opposition challenge, government agreed to postpone the swearing in of Mnangagwa. The Constitutional Court’s judgment being the final appeal stage of poll petition cleared the way for a swearing in ceremony.

Emmerson Dambudzo Mnangagwa was sworn in as president of Zimbabwe on August 26 for his first of possible two five-year tenures. He takes over officially from Robert Gabriel Mugabe, his former boss. It remains to be seen what Mugabe’s future is with the ruling Zanu-PF.