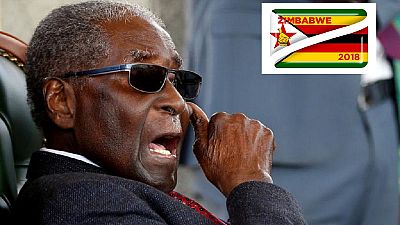 Zimbabwean president Emmerson Mnangagwa has replied his former boss Robert Mugabe with barely hours to the July 30 presidential elections – the first in decades that Mugabe is not contesting.

The president in a video message posted on Twitter said the main opposition chief, Nelson Chamisa, was in an alliance with the former president to kick the Zanu-PF out of power.

In the video posted by Zanu-PF’s UK chairperson, Nick Mangwana, Mnangagwa said the election was a choice between himself and Mugabe, with Chamisa fronting for the ousted leader.

The choice is clear, you either vote for Mugabe under the guise of Chamisa or you vote for a New Zimbabwe under my leadership and Zanu-PF.

“The choice is clear, you either vote for Mugabe under the guise of Chamisa or you vote for a New Zimbabwe under my leadership and Zanu-PF. Real change is coming. We should all be part of it. God bless Zimbabwe.”

President Mnangagwa response to the Mugabe Chamisa Alliance. He says he is the only Change candidate since his rival represents more of the same. Vote 4 the change that we want #EdhasMyVote #EDPFEE pic.twitter.com/qNQn5oKz8u

Mugabe opts to vote for Chamisa, never for his tormenters

The former president on Sunday called a surprise pres conference to “air his views” ahead of Monday’s vote. Key among other concerns Mugabe spoke about his desire that people will be allowed to vote in peace and freely.

He reiterated his point about the events of November 2017 that led to his ouster being a coup masterminded by Mnangagwa and the former army chief now vice-president Constantino Chiwenga.

He added that he hoped that the election will usher in a new era of constitutionality and legality. Asked who he would vote for, Mugabe said he had a pool of twenty-two candidates to pick from – the twenty-third which he vowed never to voted for was Zanu-PF’s Mnangagwa.

They projected that the polls were likely to head into a runoff between the two. According to the law, if no candidate gets over 50% of votes, the top two enter a runoff scheduled for September 8th.