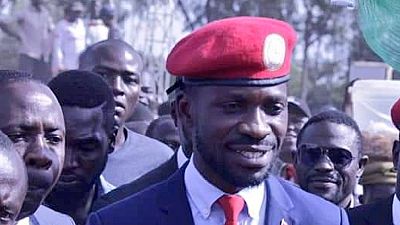 Charges against Ugandan musician turn lawmaker have been dropped by the military court sitting in the town of Gulu.
MP Robert Kyagulanyi popularly referred to as Bobi Wine was arraigned before the court last week over charges of illegal possession of firearms.

After reports of him being beaten and mistreated in detention emerged, there has been an unrelenting call for his release at home where security forces clash with protesters on a daily basis.

The hashtag #FreeBobiWine has also gone viral on social media; people in the arts industry, politicians, human rights groups and a number of western governments have all joined the call for his release.

The latest move means that he was due to be transferred from the military court to a civilian court where he was due to be charged with treason. The reason being that his actions had endangered the life of the president.

Bobi Wine’s driver was killed a forth night ago during campaigns for a by-election in the town of Arua. He claimed at the time that he was the target of an assassination attempt.

The presidency released a statement later that evening that opposition elements had attacked the president’s convoy with stone breaking the screen of a car in the convoy.