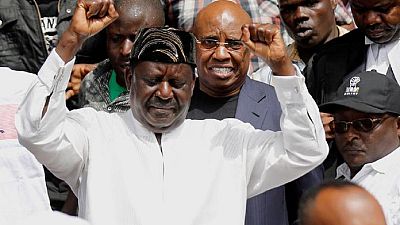 Kenya’s opposition leader will contest in the 2022 presidential elections, according to a senior member of his party, Senator James Orengo.

Odinga, who was at the center of the hotly contested and disputed 2017 presidential elections, is currently working with president Uhuru Kenyatta to reconcile and unite the nation.

Local media reported that Senator Orengo, together with other members of Odinga’s Orange Democratic Movement (ODM) party, confirmed Odinga’s intentions to launch a fifth bid at the presidency in 2022.

We are rebranding our party leader to contest on an ODM party ticket in 2022.

“We are rebranding our party leader to contest on an ODM party ticket in 2022,” said Orengo at the burial of the mother-in-law of former Gem MP Joe Donde in Ikolomani Kakemga County.

Odinga’s bid is expected to be countered by the political base of deputy president William Ruto, who has sights on the highest office in the land.

“It is not a surprise at all. We have all along known he was getting ready for another bid. We are ready for him. We are working to solidify the DP’s base,” said Senator Samson Cherargei, who supports Ruto’s presidential bid.

Uhuru and Odinga have in the past maintained that the March 9 handshake did not include 2022 succession politics.