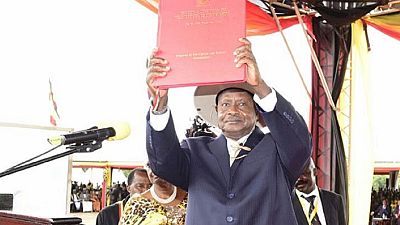 ‘‘Once somebody is arrested, charged and remanded, it is only two authorities who can release such people in any way: the Courts or the DPP withdrawing charges if the evidence is not enough,’‘ Museveni said.

He urged all who are agitating for the release of the 36 year old legislator to ‘wait for the courts and see what they decide’.

Once somebody is arrested, charged and remanded, it is only two authorities who can release such people in any way: the Courts or the DPP withdrawing charges if the evidence is not enough.

Bobi Wine, who was arrested last week and charged with illegal possession of weapons, is due to appear before a court martial on Thursday.

As politicians and his supporters maintain that the charges are politically motivated, several demonstrations and protest actions have been organised demanding for his release.

Petitions have been signed online by national and international musicians, while several activists in Kenya, South Africa and other countries have demonstrated and petitioned government to release Bobi Wine.

Great turn out Pawa254 for #FreeBobiWine concert. To everyone who performed, thank you. None of the artists were paid. swiftgraffiti thanks for the great HEBobiwine mural. To the people who came for the concert in solidarity, Asante Sana. See you all tomorrow at the protest. pic.twitter.com/hSd6zQJ0kT

Nshuti Mbabazi expressing the pain of a nation as it is! #SitukaTutambule is deep and uplifting song in these times #FreeBobiWine pic.twitter.com/2bQIfN8kJf

This is how far it has gone. A Ugandan ?? at the Selhurst Park last night during the PremierLeague asked LFC forward MoSalah to #FreeBobiWine. Liverpool won 2-0,? pic.twitter.com/LXhqmf3NI4

Museveni, who has lately, taken to issuing statements addressing Ugandans especially the youth whom he refers to as ‘Bazukulu’, local world for grandchildren, described engagement on social media as a ‘good and productive way of communicating’.

In his statement, Museveni, questioned the effectiveness of anti-riot tactics employed by security forces including the police and the army who have been dealing with #FreeBobiWine riots in different parts of the country.

‘‘Why then, shoot at them, why fire tear-gas, why fire bullets? Those mobile, tyre burning groups, who are not attacking anybody, should simply be chased on foot…arrested and be charged with appropriate offences,’‘ the president said, refering to the riots that rocked the capital Kampala on Monday.

The president says these demonstrators, who were burning tyres and posting them on social media, are ‘working for those who pay them, to show that Uganda is unstable’.

‘‘The enemies of Uganda are now worried at the emerging strength of the economy of Uganda,’‘ Museveni argued adding that Uganda is reversing trade balance volumes.

‘‘The Permanent secretary Ministry of Trade of Kenya , who was here with the Deputy President of Kenya, the other day, told me that for the months of January, February, March, April, and May(2018), Uganda exported more to Kenya than the other way round.’‘

Do not beat journalists

The president also condemned attacks on journalists, whom he accused of not doing balanced reporting because they work for foreign agents and local parasites.

‘‘I condemn, again, in the strongest terms the beating of journalists by elements of the Security forces…you can block them because sometimes they interfere with the scene of crime,’‘ Museveni said.

‘‘If they refuse, you arrest them and charge them with disobeying lawful command. Beating, however, is wrong because the Security forces do not have that power.’‘

Local journalists working for local television station NTV were arrested and beaten in Arua last week, while a video of a Reuters journalist, James Akena being assaulted by soldiers on Monday, has been widely circulated on social media.