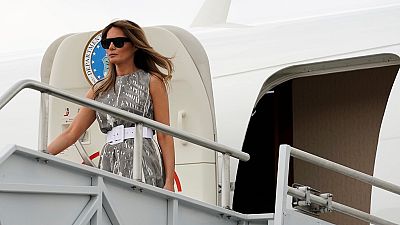 First Lady of the United States Melania Trump has announced that she will be visiting Africa in October this year. The exact date and location has however yet to be disclosed. It is the first time she is travelling alone outside the United States.

A statement from her office stated that Mrs Trump was excited traveling to Africa for the first time and that she was eager to learn about the cultures and history of her yet to be announced hosts.

“This will be my first time traveling to Africa and I am excited to educate myself on the issues facing children throughout the continent, while also learning about its rich culture and history.

We are a global society and I believe it is through open dialogue and the exchanging of ideas that we have a real opportunity to learn from one another.

“We are a global society and I believe it is through open dialogue and the exchanging of ideas that we have a real opportunity to learn from one another, the statement said.

As has usually been the case when previous First Ladies have visited, she is expected to do work on humanitarian and development related issues. The AP reporter at the White House also stated that Melania said that she’ll focus on “the issues facing children throughout the continent.”

“I look forward to highlighting the successful humanitarian work and development programs being done in many of the countries,” the statement added.

Her husband, Donald Trump, has yet to visit Africa since becoming president in early 2017. He received huge backlash after he was reported to have described Africa as a shithole. Trump denied using the term.

He confirmed to Egyptian president Abdel Fattah Al-Sisi that he will visit the North African country sometime. Aside Al-Sisi, Nigerian president Muhammadu Buhari met with Trump at the White House months back. Uhuru Kenyatta of Kenya is due to visit later this month.