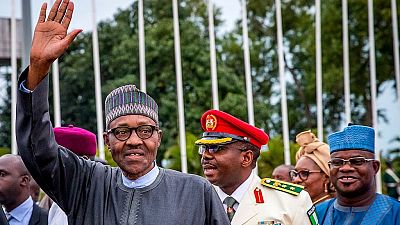 Nigerian president Muhammadu Buhari returned to the country on Saturday evening after a 10 working day vacation to the United Kingdom. His plane landed at the Abuja airport where he was received by top officials of government.

In his first interview after returning, Buhari addressed the issue of corruption and responded to political ongoings in the country during his absence. He said he was ready to jail corrupt politicians as has long been expected of him.

“We are going to jail more of the thieves (you know) that brought the economic problems to the country. I think this is being expected of me and I will do it,” he told a reporter with NTA News at the presidential villa.

I think that should be appreciated as the beauty of democracy, let people choose which party they want to belong to but let them make sure that they have empowered their constituencies by educating them on voter registration exercise.

Corruption is seen as one of the major setbacks in Nigerian politics. A number of former regime officials are currently in court for various acts of financial malfeasance. The opposition has often dismissed it as political witch hunt.

“I think that should be appreciated as the beauty of democracy, let people choose which party they want to belong to but let them make sure that they have empowered their constituencies by educating them on voter registration exercise.

“And make sure that they’ve got their permanent voters cards and that they use their rights as Nigerians to vote who ever they like, across ethnicity and religion, that is the beauty of democracy in Nigeria, this is what I am hoping to see,” he stressed.

Whiles Buhari was away, an armed blockade on the premises of the legislature led to the firing of the local spy chief, Lawal Daura, by his vice president who was acting president.

Acting president Osinbajo also directed the immediate overhaul of an anti-robbery unit of the police service. There had been an online campaign months back against the then Special Anti-Robbery Squad of the police. The police hierarchy has since announced measures to implement the presidential directive.

Buhari who came to power in 2015 is seeking a final term in elections due in February 2019. His party, the All Progressives Congress (APC), has been hit in recent times by a series of high-profile defections with the main opposition Peoples Democratic Party (PDP) being direct beneficiaries.

A breakaway faction of the APC, the Reformed – APC, has since entered unity talks with the PDP ahead of the polls. Buhari came to power on the back of three main plank – fight against corruption, economic revival and fight against terrorism and general security.