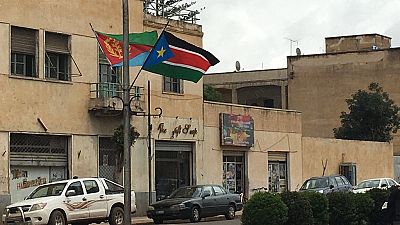 South Sudanese president Salva Kiir is expected to meet his Eritrean counterpart Isaias Afwerki in Asmara on Saturday, some Eritrean journalists have reported.

Even though the government has yet to confirm the visit, it signals continuation of Ethiopia’s buzzing diplomacy with neighbours in the Intergovernmental Authority on Development, IGAD, region.

The agenda of Kiir’s visit is not known immediately but photos shared on social media shows flags of the two countries flying side-by-side on street lights in Asmara as was the case when Ethiopian and Somali leaders visited in recent months.

Ethiopian Prime Minister arrived in Asmara on a two-day official visit in July during which period Ethiopia and Eritrea made peace after two decades of hostilities.

Next to visit Asmara was Somali president Mohamed Abdullahi Mohamed Farmaajo who undertook an official three-day visit late July. In both instances, Eritrea restored all friendly and neighborly ties with the countries of the visiting leaders.

Eritrea’s other diplomatic disagreement is with neighbouring Djibouti who accuse Asmara of occupying their sovereign territory and holding their nationals as prisoners of war.

Asmara’s agression towards Djibouti is part of the reason the United Nations imposed an arms sanction of the country. Eritrea has dismissed Djibouti’s claims and has yet to indicate whether it will submit to an independent arbitration that Djibouti recently requested from the UN Secretary General.