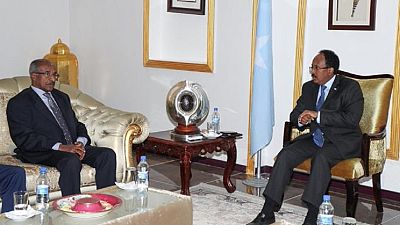 An Eritrean government delegation arrived in the Somali capital Mogadishu on Monday to hold high-level meetings.

Later in the afternoon, the team met with President Mohamed Abdulahi Mohamed who according to reports briefed them on progress of Somalia’s domestic and external challenges.

President Mohamed further reaffirmed Somalia’s commitment to the Joint Declaration signed by both countries and outlined priorities for its implementation. The said declaration was signed during a historic official visit to Asmara in July 2018.

Eritrea’s delegation delivered a message from President Isaias Afwerki to his Somali counterpart. The Somali PM participated in the meeting.

The Somalia – Eritrea thaw in relations comes after that of Ethiopia and Eritrea, which event saw about two decades of hostilities normalized.

Diplomatic and security watchers say a remaining diplomatic tension in the region is between Djibouti and Eritrea. The two nations have a border disagreement with Djibouti insisting that Eritrea still holds some Djiboutian soldiers.