Eritrean officials in Ethiopia to discuss implementation of peace deal 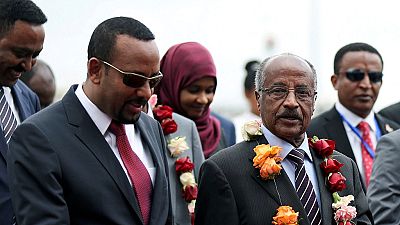 A senior Eritrean delegation is due in the Ethiopian capital Addis Ababa to discuss implementation of a historic peace deal between the two countries.

The “delegation will deliver a message from President Isaias Afwerki to Prime minister Abiy Ahmed and discuss progress of the implementation of the agreement,” Minister Yemane Meskel said in a tweet.

PM Abiy returned to Addis Ababa after a historic visit to Eritrean capital Asmara in July 9. During his two-day visit, he was warmly received by the government and people of Eritrea.

At the end of the visit, the two leaders signed a five-point agreement ending twenty-year war and restoring relations between them. The summaries read as follows:

The “State of war that existed between the two countries has come to an end,” Eritrea’s information minister, Yemane Gebremeskel, wrote on Twitter.

Afwerki has since visited Ethiopia on the invitation of Abiy. The peace deal has severally been hailed as a positive step towards boosting peace and security in the wider Horn of Africa region. It is reported that some Arab nations – particularly Saudi Arabia and the United Arab Emirates – played key roles.