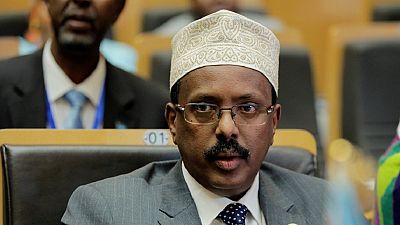 The president of Somalia has come under domestic critique for a diplomatic position he recently advocated during an official trip to the Eritrean capital, Asmara.

President Mohamed Abdullahi Mohamed Farmaajo’s call for United Nations sanctions on Eritrea to be lifted has been described as “irresponsible and reckless” and one that was “in violation of diplomatic norms and protocols.”

An August 2, 2018 statement issued by four Somali political groups stressed that Djibouti the other interested party in the Eritrea sanctions was Somalia’s ‘closest and most reliable ally,’ and thus deserved better. The said groups are Wajadir, Daljir, Kuran and Horusocod.

Furthermore, with its limited resources, Djibouti spared no efforts in helping Somalia stand on its feet again. No country in the world had devoted as much energy, resources and, above all, its own peacekeepers in the quest to bring about peace and stability in Somalia.

Whiles condemning the president, they also praised diplomatic developments in the Horn of Africa region more specifically the thawing of relations between Eritrea and Somalia, which has since led to restoration of ties and plans to reopen embassies in the respective countries.

The statement read in parts: “Any engagement by Somalia with Eritrea must be considered within the broader regional context, and the inseparable interests of Somalia and Djibouti as reflected by their historical brotherly friendship.

“Furthermore, with its limited resources, Djibouti spared no efforts in helping Somalia stand on its feet again. No country in the world had devoted as much energy, resources and, above all, its own peacekeepers in the quest to bring about peace and stability in Somalia.”

The group concluded by issuing an apology to the people and government of Djibouti for what it said was an ‘incalculable mistake,’ by the president.

“We call on President farmaajo to take all necessary measures to rectify his embarrasing gaffe and apologize to the people and government of Djibouti for betraying their trust,” their statement concluded.

The dispute between the two Horn of Africa countries relates to the shared land border, rights to the Doumeira Islands in the Red Sea and the delineation of the maritime boundary.

Djiboutian envoy to the United Nations, Mohamed Siad Doualeh is on record to have said he believes the boundaries should be based on 1900 and 1901 treaties between then colonial powers Italy and France. Those treaties, he said, would give the contested islands to Djibouti.

Fighting erupted in 2008 between armies from the two countries in a sandy outcropping known as Ras Doumeira. Doualeh said he is cautiously optimistic that a prisoners of war release by Eritrea in 2016 signaled a step forward in relations between the two neighboring countries.

Djibouti’s embassy in Mogadishu issued a strong statement against the Somali president days ago. Their position was backed by former Somali President Hassan Sheikh Mohamud in a Facebook post on Thursday.

“Djibouti paid ultimate sacrifices to stand on our shoulder….did our leaders ask themselves how many (Djibouti) children lost fathers, how many wives lost husbands or how many mothers lost their sons in our support?” his post authored in Somali read in part.

BREAKING: 4 political groups have condemned M_Farmaajo call hor lifting of arms embargo on Eritrea. The groups describe M_Farmaajo’s move as “irresponsible and premature action at the expense of the Republic of Djibouti, which has been Somalia’s closest and most reliable ally”. pic.twitter.com/ZojkXuFCxK