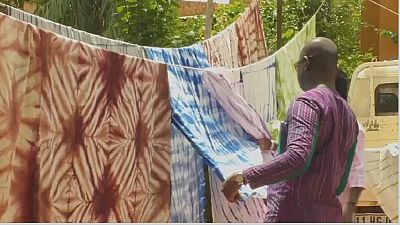 Burkina Faso has for centuries being renowned for its Faso Dan Fani fabric.

Now, a Burkinabe fashion designer is reviving the use of one of the country’s oldest traditional fabrics. The Koko Dunda, by giving it a modern twist.

He was able to showcase some of his collection of the handmade fabric at a fashion show in the city of Dioulasso.

“I wanted to challenge everyone to rethink this fabric and I think I have done that with my own company Bazam’se. I think that the Koko Dunda is now fully part of Burkina fashion scene,” said the designer, Sebastien Bazemo.

Apart from just giving the fabric a comeback, Bazemo says he is motivated and focused on improving the lives of Burkinabe women, who traditionally practice cloth dying.

“I have been dyeing the Bazin and Bogolan cloth for the last 30 years. But we only started working with the Koko Dunda cloth when Bazam’se made it popular again, and we started producing it in large quantities. From 750 CFA Franc (1 USD) the fabric now costs 3500 CFA Franc (6 USD) and more and even better. I am struggling to meet demand from my customers. With the profit that I make, I have managed the send three of my children to university in Europe,” said Sata Coulibaly, who dyes for Bazemo.

“For me it’s a way to create employment for our dear mothers, who have been working with this fabric for many years and who were not benefiting from it. It’s away to give them support. It’s time for Africans to start exploring their textiles and not allow to be invaded by everything that comes from abroad,” said Sebastien Bazemo.

Koko Dunda lost its allure over the years and was even described as a loincloth reserved for the underprivileged sections of the society.

Bazemo now says he is working towards attracting more international clients, having already received orders from the United States and Europe.