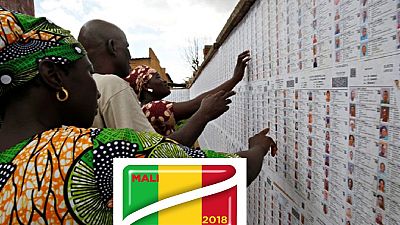 Malians will head to the polls on Sunday to vote in a presidential election that observers say will test the stability of the country.

As ethnic tensions and clashes continue across the country, especially in the North, there are doubts the elections will be held in some parts, but the West African country has a long history of relatively peaceful elections.

On 4th July, the Constitutional Court validated 24 candidates to run in the July 29 presidential race while six applications were rejected.

73 year old Ibrahim Boubacar Keita popurlarly known as IBK announced on 28th May that he would seek a second term in the upcoming elections.

“I present myself as a candidate in the presidential election of July 29,” Keita said on state TV. “I ask you to trust in me again.”

He then served as President of the National Assembly from 2002 to 2007.

Keita was born in Koutiala in central Mali and was educated at Paris’s Sorbonne University and Lycée Askia-Mohamed in Bamako, the Malian capital.

He holds degrees in history, political science and international relations.

He twice stood unsuccessfully as a presidential candidate, in 2002 and 2013, losing in the second round of voting on both occasions.

Since 2014 he has been President of the Union for the Republic and Democracy, and is the opposition leader in the National Assembly.

Cisse is married to Astan Traore with whom he has four children.

Born on 30 March 1952 in Bamako, Bathily is a politician and lawyer.

He has served at several levels of government including as senior magistrate, professor of law, director of cabinet under three different ministers of justice. He has also previously served as ambassador of Mali to Senegal.

In September 2013, he was appointed Minister of Justice in the government Oumar Tatam Ly. He then took over the Ministry of State Domains and Land Affairs in January 2015 and also served as Ministry of Urban Planning, Housing and Land Affairs from April 2017 until December 2017.

She is the only female candidate in the field of 24 presidential hopefuls and says she has grown accustomed to taking on what people traditionally call ‘a man’s world’.

“What a man can do, a woman can do…the only differences, barriers or limitations are those we create for ourselves,’‘ according to N’Diaye.

Dramane was appointed Minister of Urban Planning and Housing of the Keïta government in January 2015, before he formed ARDEMA as a vehicle for his political ambitions.

He studied sciences at the Lycée de Ségou in 1988 then joined the École Nationale des Ingénieurs (ENI) in Bamako where he obtained his geological engineering diploma in 1993.

Dramane is married and has three children.

Diarra was appointed as interim Prime Minister of Mali on 17 April 2012 to help restore civilian rule after the March 2012 coup d‘état.

After graduating high school in Mali, Diarra studied mathematics, physics, and analytic mechanics in Paris at the University of Pierre and Marie Curie. He then received a Masters in aerospace engineering and a PhD in mechanical engineering, both from Howard University in Washington, D.C.

Diarra was the chairman of Microsoft Africa from 2006 until the end of 2011.

Turning to Malian politics, he founded the Rally for the Development of Mali, a political party, in March 2011, and he intended to stand as a candidate in the 2012 presidential election.

The married father of three said he was driven to run for the Malian presidency by his desire to better the lives of the country’s rural poor.

Born on 18 November 1959, Diallo is a Malian businessman and politician.

He is the President and Chief Executive Officer of Wassoul’or, who made the first attempt to explore and operate an industrial gold mine in Mali.

In January 2013, he created the Democratic Alliance for Peace – Maliba (ADP-Maliba), a political party whose mission is to “renew Mali’s politics” by “building a democratic and prosperous Mali through the social market economy.

Aliou Diallo excelled at the technical high school in Bamako, earning a scholarship which enabled him to study at the Faculty of Economic, Legal and Political Sciences in Tunis from 1979 to 1981. He then went to the University of Picardy in France to obtain a degree and a master’s degree in economics and financial management (1982-1983).

Diallo is married and is described as a ‘father to a large family’.

The other candidates include: