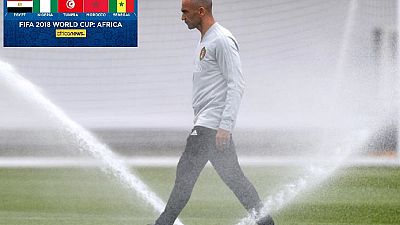 Roberto Martinez’s swashbuckling Belgium side head into Tuesday’s semi-final with familiar foes France as the World Cup’s leading scorers, but their old rivals have evolved as the tournament has progressed and will also be full of confidence.

Belgium have scored 14 goals in five matches and were hugely impressive in their 2-1 quarter-final victory over Brazil, with Romelu Lukaku, Eden Hazard and Kevin de Bruyne combining to devastating effect to oust the five-times world champions.

In contrast, France sleep-walked through the group stages, eking out wins over Australia and Peru before a stultifying 0-0 draw with Denmark.

Their early struggles had ‘Les Bleus’ being written off in some quarters, but all that changed when they faced Argentina in the last 16 in what must be a leading contender for the most exciting match of the tournament.

Didier Deschamps tweaked his formation, effectively freeing up Kylian Mbappe on the right to run at the Argentine defence, and what followed was a wonderful display of attacking football that France won 4-3.

The victory boosted France’s morale, and they followed it up with a workman-like 2-0 win over Uruguay that was impressive because of how well they managed to control the game against tricky opponents.

Belgium faced a heart-stopping moment of uncertainty in the first knockout round against Japan, when Martinez’s decision to rest players in their final group match against England almost backfired spectacularly.

Belgium’s returning first team players made a sluggish start against the Samurai Blue and suddenly found themselves trailing by two goals with time ebbing away.

Stung into action, Martinez sent on Marouane Fellaini and Nacer Chadli in the 65th minute, and both were heavily involved as Belgium pulled off a late comeback, with Chadli securing victory with practically the last kick of the game.

Against Brazil in the quarters, Martinez showed tactical adventure, as he pushed target man Lukaku to the wing to allow De Bruyne to operate as a ‘false nine’. The strategy worked, and De Bruyne scored his first goal in Russia.

Tuesday’s clash in St Petersburg has all the makings of a classic, with fans and viewers likely to be treated to the sight of two wonderfully attacking teams going toe-to-toe.

“It’s a super exciting game with great players on both sides,” France defender Benjamin Pavard said. “It’s going to be a man’s match and we will have to step up.”

France, world champions in 1998, are slight favourites to go through according to most bookmakers, but Belgium tend to step up their game against these particular European rivals, if history is anything to go by.

Of the 73 meetings between the teams, Belgium have won 30 and France 24, with 19 draws between them, although if Belgium are to reach their first World Cup final they will have to do so by beating France at the tournament for the first time.

France came through their quarter-final unscathed, and Deschamps has his entire squad to choose from, while Belgium are only slightly worse off.

Full back Thomas Meunier is suspended after picking up a second yellow card of the tournament against Brazil, with Martinez likely to bring in Yannick Carrasco in his place.