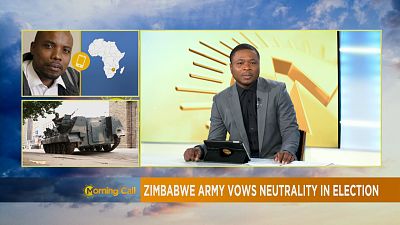 Zimbabwe will go to polls on July 30. And while the country gears up for the first general elections without long time leader Robert Mugabe at the helms, the army has vowed it will stay neutral, dismissing suggestions it has deployed personnel to influence the outcome of the polls.

Some local media reports had accused the army of deploying active service personnel to rural areas to campaign for the ruling ZANU-PF. The army played a key role in ousting former president Robert Mugabe from office in November last year paving way for Mnangagwa.

Zimbabwean political Analyst, Ernest Mudzengi shares some insight on the politics in Zimbabwe with Africanews Jerry Bambi on ‘The Morning Call’.