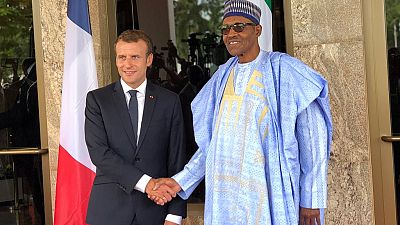 Macron arrived in Abuja, the federal capital of Nigeria, on Tuesday, where he addressed a joint press conference with his counterpart Muhammadu Buhari. The two leaders discussed security in the region, although Macron went further and highlighted the cultural aspect of his visit to Africa’s biggest economy.

In the fight against the jihadist insurrection of Boko Haram, Macron reiterated France’s commitments to support the “defence and stabilisation of the Sahel region”, in particular through the strength of the G5 Sahel, which was at the heart of discussions at the African Union summit in Nouakchott.

It is an iconic place for African culture. Fela Kuti has created a civil society protest, which shows that in Nigeria there is a permanent dialogue.

“You have a friend in France,” he assured the Nigerian head of state, who still faces Boko Haram in the north-east of the country.

Buhari noted that all the countries bordering Nigeria were French-speaking, and that France’s assistance was therefore essential for the proper coordination with neighbours in the fight against terrorism.

But Macron was quick to highlight that “the heart of this visit is to broaden the partnership between France and Nigeria on cultural, economic and sports subjects”, which according to him give “perspectives and opportunities to youth” so that they do not join the jihadist movements.

“We must show the vitality of the African cultural sector, of which Nigeria is a showcase,” he said.

After this press conference, Emmanuel Macron immediately flew to Lagos, the economic and cultural capital of West Africa, where he was to attend an unusual evening of concerts, theatre and fashion shows at the New Afrika Shrine, a concert hall founded by the late Afrobeat king, Fela Kuti.

In Lagos, the French president is set to announce the launch of the African Cultural Season, which will be hosted in France in 2020.

“It was above all a good excuse for me to go back,” joked Macron, who did his internship from the National School of Administration (ENA) at the French Embassy in Nigeria more than 15 years ago.

“It is an iconic place for African culture. Fela Kuti has created a civil society protest, which shows that in Nigeria there is a permanent dialogue,” he explained to President Buhari.

Ironically, Fela was imprisoned by General Muhammadu Buhari during his first stint as military president in the 1980s.

Nigeria remains an important partner for France. Its market of 180 million people is essential and the country, with a global production of some 2 million barrels/day, represents more than 10% of the production of the French group Total.