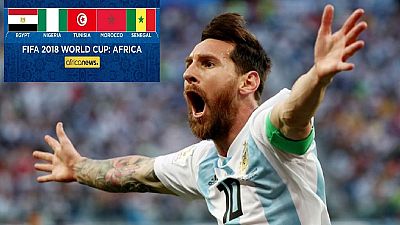 With Argentina needing to beat Nigeria on Tuesday in St Petersburg to have a chance of qualifying for the last 16 at Russia 2018, Lionel Messi stepped up and gave his side a 14th-minute lead.

Ever Banega’s lofted throughball was ideally placed for Messi to impressively control and hammer home a right-footed drive to put Jorge Sampaoli’s men in front. Messi’s strike became the 100th goal scored at the 2018 FIFA World Cup in Russia.

Messi had failed to score in Argentina’s two previous Group D games, missing a penalty in a 1-1 draw against Iceland and proving toothless as his side were thumped 3-0 by Croatia.

The Barcelona superstar has now scored six World Cup goals, three of which have come in matches with Nigeria, against whom he last struck in the last tournament four years ago.

Messi is lagging well behind in the race for the Golden Boot, though, which is being led by England captain Harry Kane on five goals, with Portugal skipper Cristiano Ronaldo and Belgium’s Romelu Lukaku both one behind.

The 100th goal at the 2014 World Cup was scored by Messi’s former Barcelona team-mate Neymar for Brazil, while the landmark strike in 2010 came from another of his previous club colleagues, Andres Iniesta for Spain.