World Cup: Senegal back in action, England on brink of qualification 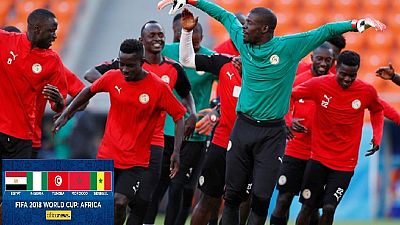 Senegal, who were the first African team to get a win at this year’s World Cup play on Sunday against Japan who upset Colombia in their opening fixture, winning 2-1 against the team that beat them 4-1 at the 2014 World Cup in Brazil.

In the other Group H fixture, Poland who lost 2-1 to Senegal, will take on Colombia who will be also be looking to bounce back from defeat.

England will play against Panama in a Group G fixture that could see the Three Lions qualify for the next round with a win.

We are not fearful of Senegal at all. We’re much looking forward to the match, how we are going to beat them.

England, who won their opening game against Tunisa 2-1, thanks to a Harry Kane double are expected to win comfortably aginst World Cup debutants Panama.

Panama lost the opening game, 3-0 to Belgium, who top Group G with six points having beaten Tunisia 5-2 on Saturday.

A win for England would confirm qualification for Gareth Southgate’s team, as well as Belgium while Tunisia and Panama would be eliminated.

Senegal, who made an impressive debut to the World Cup in 2002, when they made a successful run to the quarter final, beating defending champions France in the process, are hoping to surpass that record.

Coached by the captian of that historic side, Aliou Cisse, the Lions of Teranga have a potent weapon in Liverpool’s Sadio Mane, who togther with Egypt’s Mohamed Salah and Brazil’s Roberto Firino, had a record breaking season last season.

Japan’s coach Akira Nishino believes that Mane might still pose a danger, even if he is marked with three players in Sunday’s clash.

“It’s possible to stop him, but he has an influence on the other players and that’s what we are concerned about,” Nishino said.

Nishino, appointed only in April, said he would probably stick to a similar starting lineup to the one used against Colombia.

“We are not fearful of Senegal at all,” he said. “We’re much looking forward to the match, how we are going to beat them, and I’d like to show you how tomorrow.”

Poland are still “angry” about their shock defeat in the World Cup opener against Senegal and their rancour will propel them to victory against Colombia, coach Adam Nawalka said on Saturday.

The eighth-ranked Poles are desperate for a result in the Group H clash in Kazan on Sunday, having given up two goals from terrible defensive errors to lose 2-1 to the African side.

But Colombia could equally be angry, having lost their opening fixture.

Ten-man Colombia lost 2-1 to Japan in another first round shock but the South Americans could be bolstered by the return of danger man James Rodriguez to the starting side after the playmaker started on the bench against the Blue Samurai while recovering from a muscle injury.