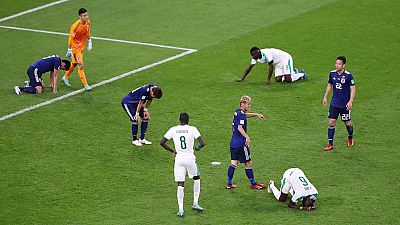 Senegal were held to a 2-2 draw by Japan in their second 2018 FIFA World Cup Group H match at the Yekaterinburg Stadium in Russia on Sunday.

The result means, the Teranga Lions stay top in Group H, while the Blue Samurai remain second of the table.

The Teranga lions were the better side in the early exchanges and deservedly took the lead 11 minutes into the game.

Sadio Mane scored from close range to make it 1-0 to Senegal after Youssouf Sabaly’s shot was parried into his path by Japan goalkeeper Eiji Kawashima.

The Samurai Blue tried to respond with a goal, but Makoto Hasebe’s goal-bound long-range shot was blocked inside the Senegal box in the 16th minute.

The Senegal defence which was led by Salif Sane looked solid and organized with Idrissa Gueye working tirelessly just in front of the backline.

Sane, who is set to join German side Schalke 04 next month, made two good clearances from Gaku Shibasaki’s free-kick and Yuto Nagamoto’s cross.

However, the Senegal defence was exposed in the 34th minute following some good work Nagamoto down the left-hand side.

Nagamoto controlled the ball well, before setting up Takashi Inui, who curled the ball into the bottom corner to make it 1-1 for Japan.

The Teranga Lions then tried to restore their lead with the half-time break fast approaching.

M’Baye Niang, who netted for Senegal against Poland on Tuesday, had a chance to score after being sent through on goal by Pape N’Diaye.

Next match: #POL versus #COL
- loser gets eliminated
- every team in this group could end up with 4 points each. CRAZY!

However, the lanky forward was brilliantly denied by on-rushing Kawashima to ensure that the first-half ended with Japan and Senegal locked at 1-1.

The Blue Samurai looked lively after the restart and they nearly scored through their main striker Yuya Osako three minutes into the second-half.

The marksman rose highest inside the Senegal box and he forced keeper N’Diaye into a good diving save.

N’Diaye was beaten in the 65th minute by Inui, but the crossbar came to the Teranga Lions rescue and the Africans survived a scare.

Senegal however took the lead again against the run of play after some good work by Sabaly down the left-hand side.

Sabaly’s cross found an unmarked Moussa Wague, who fired past Kawashima to make it to make it 2-1 to Senegal in the 71st minute.

It was end-to-end stuff as Keisuke Honda proved to be a super-sub after replacing Shinji Kagawa.

The CF Pachuca midfielder fired home with a powerful shot to make it 2-2 for Japan in the 78th minute after the Senegal defence was exposed.

The two teams launched late attacks in search of a winning goal, but it did not come and ultimately, Japan, and Senegal settled for a 2-2 stalemate.

Japan and Senegal are evenly good teams. Impressed by them both so far in the tournament.