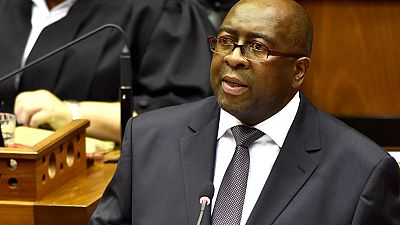 Restructuring state-run power firm Eskom is “on top of the agenda” for South Africa, the country’s finance minister Nhlanhla Nene said on Friday, though he said recent outages likely had very little impact on the economy.

Africa’s most industrialised economy suffered power outages earlier in June because of what Eskom said was an “illegal protest action” by South Africa’s National Union of Mineworkers (NUM) and two other unions.

The last time there were controlled power outages in 2015, economic output suffered.

It should be very minimal this time round, because... it also was related to the impasse in the industrial space.

“It should be very minimal this time round, because… it also was related to the impasse in the industrial space,” Nene told reporters on the sidelines of an Africa conference hosted by Standard Bank.

“Beyond the discussions and the negotiations on the salaries, what is important is actually beginning to restructure Eskom,” he added. “It is on top of our agenda to get Eskom on a sustainable platform.”

Discussions on the issue of wages with unions were continuing, Nene said, but asked if the government had the funds satisfy unions’ wage demands, he replied that the money “does not exist”.

“What exists is the goodwill and political will also to have an honest, open, frank discussion how to best take this forward in the interest of South Africa.”

Nene also said South Africa was continuously trying to remind major central banks around the world of the effects their monetary policy had on other economies.

Emerging markets have been roiled by a sell-off in recent weeks, which accelerated after a U.S. Federal Reserve meeting that raised the prospect of the central bank increasing interest rates faster than previously expected.

Due to its high external financing needs, South Africa is more vulnerable than other emerging economies to a global rise in borrowing costs.

“We are just trying to appeal to the developed economies, to the U.S. in particular, to be much more cautious,” he said.

“We should all be alive to the spillovers… be it monetary or fiscal, to other parties,” he said. “But the recent (rise in the) level of protectionism has led to a complete undermining of multilateralism.”

Nene added that South Africa needed to build up its fiscal buffers to be able to withstand any external shocks and that he expected the economy to expand at 1.5 percent in 2018 despite the surprise contraction in the first quarter.