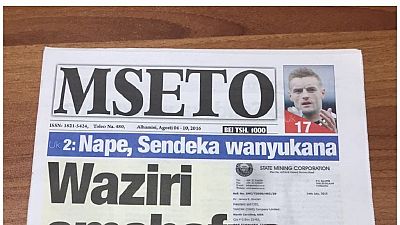 The East African Court of Justice has ruled that Tanzania must annul the publication ban placed on a local weekly newspaper two years ago.

Mseto was suspended for three years in August 2016 after publishing allegations that President John Magufuli’s successful election campaign the previous year had been partly financed through corrupt means.

However, the court said the suspension must be lifted as the newspaper had not “violated the public interest, or the interest of peace and good order” and that the ban is “in violation of the right of freedom of expression”.

There was no immediate response from Tanzanian authorities.

Since his election, Magufuli has closed several critical newspapers while rights groups have protested against the imposition of new restrictive laws on freedom of expression.

Pressure group Reporters Without Borders ranked Tanzania 93rd out of 180 countries worldwide in its 2018 World Press Freedom Index, down 10 places on the previous year.