Iceland will feel the heat in Volvograd: Nigeria coach Rohr 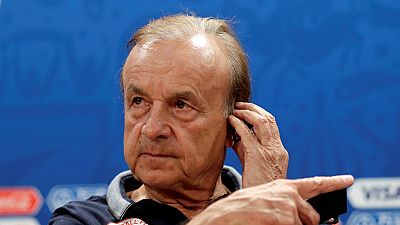 Nigeria coach Gernot Rohr says that his side are looking to turn up the heat on Iceland in a sweltering Volgograd on Friday as they bid to keep their World Cup campaign alive.

The Super Eagles must avoid defeat after opening Group D with a 2-0 loss to Croatia, while Iceland managed a surprise 1-1 draw with Argentina.

And Nigeria are hoping the temperature will work in their favour in the southern Russian city, where the mercury is expected to still be topping 30 Celsius at the 1800 local-time kick-off (1500 GMT).

Weather advantage for the Super Eagles

The African players should be more acclimatised to the hot conditions than their northern opponents who hail from just outside the Arctic Circle.

Rohr said they will use any advantage they can. “It will again be an away game for us, they will have 20,000 fans here so let’s have a little advantage with the temperature,” the German coach told reporters at the Volgograd Arena on Thursday.

Defeat would see Nigeria become the third African side after Morocco and Egypt to be dumped out after just two group matches, and Rohr hit back at a reporter when asked if a loss might see his job on the line.

Nigeria are the youngest squad in Russia and Rohr said the experience would see them return much stronger for the next World Cup in Qatar.

“We have John Obi Mikel who is still a very good player and we have Victor Moses and they are well known everywhere.

“But when you have such young players what you have is a team for 2022. They will get better and better. We are (ranked) about 50 in the world, Iceland are top 20, I think, Croatia top 12 and Argentina top eight.’‘

“When I see the matches are so difficult then we have to learn also it is not finished after this World Cup for us. We want to improve, we want to learn.

“When you are the youngest already it is not possible perhaps to be already the best.”
Rohr reiterated that he thought his side had been unlucky to lose their opener and had played well, so spirits in the camp remained high.

“We are ready for this match and we are united, we are working like a team and living like a family.You can’t always win. They did a good match against Croatia.’‘

“We had 47 percent possession of the ball, we had 14 shots on the goal, they only had 12. They scored two goals but I think we deserved a draw.”