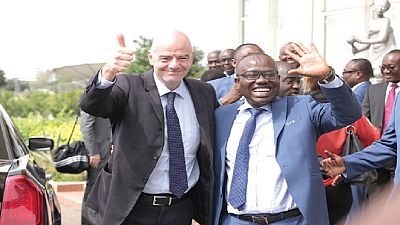 FIFA Council member Kwesi Nyantakyi is banned from soccer while under investigation for taking cash gifts in a Ghanaian media undercover sting.

Nyantakyi, vice president of the Confederation of African Football, is barred from attending a FIFA Council meeting on Sunday in Moscow, and the 2026 World Cup hosting vote three days later.

Ghana FA boss Kwesi Nyantakyi banned from all football activities for 90 days so investigations into the events seen in the #Number12 documentary can be done. pic.twitter.com/pHSoAxxmzN

Let’s not forget that the GFA does not have a sitting Vice-President. So who runs the FA now that Nyantakyi has been banned for 90 days?

A television documentary this week showed Nyantakyi taking $65,000 in cash from undercover reporters posing as businessmen to secure favor with Ghana President Nana Akufo-Addo and other government officials.

Ghana has said it will dissolve its national football association after Kwesi Nyantakyi was filmed apparently accepting a “cash gift”.

Nyantakyi banned from all football related activity for a provisional period by FIFA find out more here #Citisports #Number12 pic.twitter.com/e7DbgQdiqw

FIFA do all. Does it means GH will not be banned? End of Nyantakyi #Number12Effects pic.twitter.com/uwwKeuidvm

He has not commented on the allegations.

The provisional suspension comes into force “immediately” and can be extended by 45 days, Fifa said in a statement.

Fifa could in theory ban Ghana from international competition if they deem the move to dissolve the GFA to be political interference.

So why did Nyantakyi wait to be banned before resigning?

There’s a GFA Exco meeting on-going now. Nyantakyi is chairing the meeting. He has been banned while meeting is on-going. If he sent appoint a vice b4 the ban, now he can’t or there will be legal issues. Also, he should be made to leave the meeting NOW as he’s BANNED!