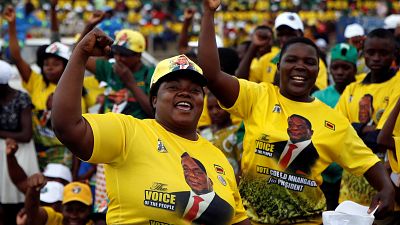 Zimbabwe’s main opposition on Tuesday marched to the independent election agency demanding reforms it said were vital for a credible vote and accused President Emmerson Mnangagwa of using soldiers to campaign for the ruling party in rural areas.

The southern African nation will choose a new president and members of parliament on July 30 in the first election since Robert Mugabe was forced to resign after a de facto army coup.

The new president hopes that if the election is certified by international observers, it could end years of Zimbabwe’s isolation by foreign lenders.

Thousands of MDC supporters in the party’s red colours marched to the Zimbabwe Electoral Commission (ZEC) offices in downtown Harare, where Chamisa and other leaders handed in a petition with their demands.

It was the first time the opposition had organised a protest since the coup. Under Mugabe, police routinely banned the marches, saying they threatened national peace and security.

Chamisa told supporters after the march that the ZEC should make public the name of the company printing ballot papers, allow an independent audit of the new voter register and ensure equal coverage by public media, among other demands.

He accused Mnangagwa of deploying soldiers in civilian clothes in the countryside to campaign for the ruling ZANU-PF, without providing evidence. ZANU-PF denied the allegation and the army has previously denied this.

“This is an election, why are you deploying soldiers against a political party? We are just contesting an election. Mr Mnangagwa be a revolutionary … be a patriot, have a free and fair election.”

Anti-riot police watched from a distance and positioned water cannon along the route of the march, but did not use them.

Chamisa said he would lobby regional and African leaders to press for the reforms and promised similar protests countrywide.

The MDC, whose founding leader Morgan Tsvangirai died from cancer in February, has formed an alliance with smaller parties in a bid to end the ZANU-PF party’s near four-decade rule.