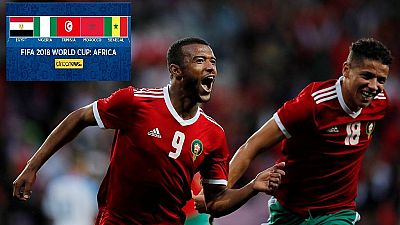 The Atlas Lions of Morocco on Monday completed a comeback show to beat Slovakia 2-1 in Stade de Genève, Switzerland for their second warm-up match ahead of the Russia World Cup in a couple of weeks.

The Moroccans dominated almost every aspect of the game but found themselves behind in the second half thanks to a Jan Gregus 59th minute strike from outside the box.

Earlier Morocco had won the possession battle, with a number of chances. Leganés’ Nordin Amrabat was impressive in the first half.

That was before Gregus nailed a shot into the bottom corner leaving Girona’s Yassine Bounou sprawling across his goal line in an effort to stop it. After that goal, it was straight back on the attack for Morocco.

Their persistence paid when substitute forward Ayoub El Kaab headed a corner home thanks to some slack defending. Shortly after that, Galatasaray’s Younes Belhanda drove a low shot into the bottom corner to complete the comeback.

Herve Renard’s side drew 0-0 with Ukraine last week and will also face Estonia in a friendly before the tournament.

For they World Cup they are pooled in Group B alongside Portugal, Spain and Iran.