'Stop fighting by June 30 or face sanctions': US proposal on S. Sudan conflict 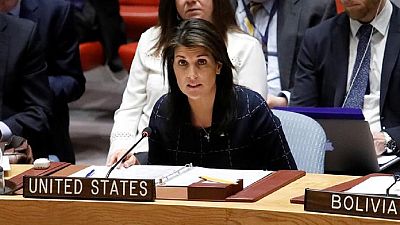 The UN Security Council is set to vote on a draft resolution presented by the United States that would give warring sides in South Sudan until June 30 to end fighting or face possible sanctions.

The proposed measure, which was seen by AFP, lists South Sudan’s defense minister among six officials who could be put on a UN sanctions blacklist if the sides fail to reach a peace deal.

The draft resolution would require UN Secretary-General Antonio Guterres to report by June 30 whether fighting has stopped and whether the sides have “come to a viable political agreement.”

We have no more time to waste on empty promises.

If not, the council “shall consider” imposing the sanctions and possibly an arms embargo within five days, according to the draft resolution.

Diplomats said it remained unclear whether the United States will win the required nine votes in the 15-member council to put in motion the move to punish South Sudan’s leaders.

In 2016, Washington failed to win enough votes at the Security Council for the arms embargo and targeted sanctions.

South Sudan won independence from Sudan in 2011, with critical backing from the United States, which remains Juba’s biggest aid donor.

But the US administration has grown increasingly frustrated with President Salva Kiir’s government as the brutal war grinds on, now in its fourth year.

In an op-ed on South Sudan published this week in the Washington Post, US Ambassador Nikki Haley said: “We have no more time to waste on empty promises.”

“By imposing financial and travel restrictions on individuals responsible for threatening the peace, we can ensure they pay a cost for perpetuating violence,” she wrote.

The Inter Governmental Authority on Development which is overseeing revival of the 2015 peace deal has also been asked to take action against saboteurs after several talks between government and rebels failed.

Since the start of the war in December 2013, nearly 1.8 million people have been forced to flee their homes and tens of thousands have been killed.